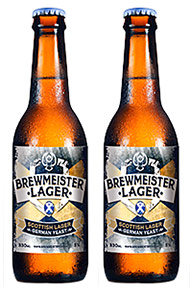 The company, which launched in 2012, will officially introduce the lager on September 18.
The brewery claims the lager is produced using just four ingredients: spring water, grains, Bavarian hops and yeast.
Brewmeister sales and marketing director Lewis Shand said the lager should appeal to “everyone, from diehard craft beer fans to those looking for a refreshing pint”.
Ahead of the launch of Brewmeister Lager the firm is offering free tap installations to bars that agree to stock its beers.