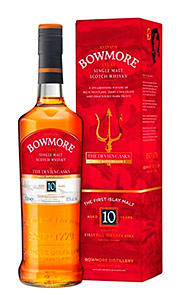 BOWMORE Distillery has released a second edition of its Devil’s Casks range after the first batch sold out last year.

The Islay distiller claims the limited edition single malt whisky, which is matured in first-fill sherry casks, is “equally as mischievous”.
The whisky’s name was inspired by a legend that the congregation of Bowmore church once spotted the devil in the church and chased him through the village into the distillery where warehousemen were filling casks and loading them aboard paddle steamer The Maid of Islay. The devil was nowhere to be seen and it’s claimed he escaped in a cask of Bowmore bound for the mainland.
Rachel Barrie, master blender at Morrison Bowmore Distillers, said the whisky “reveals even more of Bowmore’s devilish dark side”.
“The first edition of this expression was one of the most sought after whiskies of 2013,” said Barrie.
“This second small batch release will no doubt emulate that success thanks to its devilishly tasty dark side, in debt to the first-fill sherry casks it has been carefully mellowed in.”