Festival in Glasgow will target younger consumers and the trade 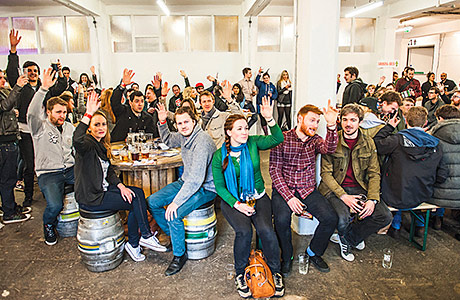 IT’S become a significant movement in the beer sector in recent years, proving popular with aficionados and newcomers alike.

And now craft beer is to be promoted to the trade as well as consumers at a major event in Glasgow later this month.
Craft Beer Rising was launched by Daniel Rowntree and Chris Bayliss in London last year, combining beer from craft brewers with street food and music. The second event, in February 2014, attracted around 4000 visitors.
This month, Craft Beer Rising is moving north for the first time with a three-day festival at Glasgow’s Drygate brewery.
Speaking to SLTN Simon Dehany, special projects manager for Craft Beer Rising, said the ethos of the festival is to appeal to a crowd that is younger and has a more even male/female split than traditional beer festivals.
“There are quite a few other festivals cropping up, and that’s great, but Craft Beer Rising established itself as the first one in the country to bring all these [craft brewers] together and bring the average age down a bit from the traditional ale demographic,” said Dehany.
“It’s just making it a bit funky and fun and bringing it to the masses.
“They [the organisers] are definitely not into the kind of nerd aspect of it; they can talk about different hops and brewing processes all day long, but they’re equally as interested in what it means to the guy out on the street, who often doesn’t give two hoots about different hops, he just wants to know whether something is a good beer.”

The event will feature more than 200 beers from over 45 brewers.

A few days prior to the Scottish festival Craft Beer Rising will host two dinner events featuring brewers from Williams Brothers and Tennent Caledonian as well as beer writer Melissa Cole. The first event, a five-course dinner matched with craft beers, will be open to trade representatives that include restaurateurs, hoteliers and chefs, while the second event will be consumer-focused.
The festival itself takes place between September 19 and September 21 at Drygate in Glasgow’s east end and will host around 200 beers from 45 different breweries that include Harviestoun, Inveralmond, Brewdog, Eden Brewery and Barney’s Beer as well as a selection from England and overseas.
The festival kicks off on September 19 with a trade event between 12pm and 5pm. Open to on-trade operators and buyers for the off-trade as well as wholesalers, the trade day will include a talk from Cole on selling and upselling beer, as well as a tour of the brewery and a session on beer and food matching.
Dehany said the beer selling talk will be aimed at “bar owners, restaurateurs, hoteliers, anybody who’s in the business of selling drinks”.
“I’ve heard part of the talk before and it’s really good,” he said. “She breaks it down into bite-size chunks you can take away and impart to your staff.
“The point of that talk is to give a sort of bluffer’s guide of how to talk to staff and how to get them to sell, and upsell, more beer.”
The trade day will also involve a ‘speed networking’ event that gives brewers the opportunity to meet buyers from across the on and off-trades.
Dehany said this latter event should be particularly useful for the smaller brewers attending the event.
“The margins are already so small for a lot of these smaller brewers, we need to make sure that they’re talking to the right people,” he said. “It’s about them putting faces to names, telling people about their brewing processes, distribution networks, their ideas for potential expansion for the future etc.
“But if you’re running a nice restaurant or a hotel I’d like those people to be there as much as the buyers from Asda, Waitrose, Sainsbury’s, etc.
“It’s really about them [the brewers], they’re paying us money to put on this event, so we want to give them their money’s worth by having an introduction to Mr X from whatever company, where ordinarily they would find it very difficult.”
Tickets to the trade event are free, and operators can register at www.craftbeerrising.co.uk.
On Friday evening it’s time for the festival proper.
In addition to beers from each of the exhibiting breweries, there will be demonstrations and talks from brewers, as well as a range of live music.