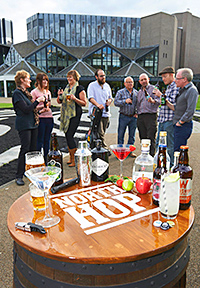 SOME of Scotland’s top craft brewers will showcase their beers at the inaugural North Hop festival in Inverness later this month.

Ten producers, including Windswept Brewing Co, Brewdog, Cromarty Brewing Co, Six Degrees North, Eden Brewery, Inveralmond Brewery, Loch Ness Brewery, Thistly Cross Cider, William Bros Brewing Co and Fallen Brewing Co, will bring more than 50 beers and ciders to the food and drink festival at Eden Court theatre in Inverness on August 29 and 30.
As well as beer, the event will showcase cocktails, artisan gins, street food and musicians.
Michelle Russell, festival organiser, said: “The development and trend of craft beers has increased dramatically over the past few years and craft beer now seems to be popular with not just men, but women as well. It’s great to see how successful it is, as being a fan of craft beers I think it’s really important that we embrace this and showcase good Scottish produce at its finest.”
George Wotherspoon of Loch Ness Brewery, which will launch its new beer, Inverness, at the event, said: “This festival is a celebration of beer and with it just being 20 minutes up the road from our brewery, we’d be mad to miss out.”