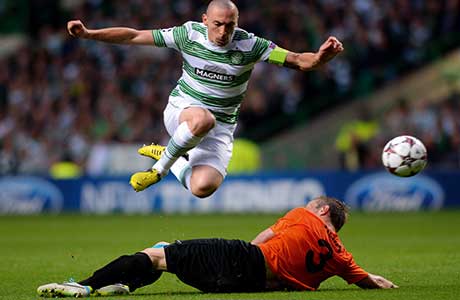 Broadcasters set to show over 80 Scots games this season

SCOTTISH football kicks off for another season on August 9 and this year broadcasters will be serving up a double dose of drama with live coverage of the Scottish Premiership and Championship.
Sky Sports and BT Sport will continue to share coverage of SPFL league games screening 70 live matches between them this season.
Championship coverage will include 15 Rangers games and four Edinburgh derbies from the Championship as newly relegated Hearts and Hibernian fight it out in the second tier of Scottish football.
A further 16 Scottish live matches from across the Championship, Scottish League 1 and Scottish League 2 will also be broadcast this year on BBC Alba.
Neil Doncaster, chief executive of the SPFL, said the league is delighted to have reached an agreement that includes coverage of all four of this season’s Edinburgh derbies.
“Combined with BBC Alba’s live coverage of a further 16 matches from across the Championship, League 1 and League 2 viewers will be able to follow the drama every step of the way,” he said.
“All this means more live television exposure for Scottish league football than ever before.”
Sky Sports managing director Barney Francis said the broadcaster will kick off its Scottish football season with Rangers’ and Celtic’s opening matches, and the first Edinburgh derby.
“The SPFL is a vital part of our unrivalled football schedule and this season we’ll also bring Scotland’s UEFA Euro 2016 qualifiers and Celtic’s Champions League campaign,” he said.
“This is Sky’s 24th year covering Scottish football and we’re really looking forward to bringing our viewers more of the best matches this season.”
Simon Green, head of BT Sport, commented: “BT Sport thoroughly enjoyed our first Scottish Professional Football League (SPFL) season, bringing fans plenty of storylines culminating in the unforgettable inaugural dramatic Premiership play-off final.
“Next season our team, led by Darrell Currie and Gary McAllister, will bring fans more live action from across the SPFL Premiership and Championship.
“We look forward to continuing to work with our partners across the Scottish game.”
Alan Esslemont, head of content at BBC Alba, added: “BBC Alba’s coverage of Scottish football is both well known and warmly regarded by audiences throughout Scotland so we are delighted to be able to add 16 live SPFL games to our schedule.
“We are pleased to be able to work with the SPFL to raise the profile of our national game as another exciting season lies ahead.”