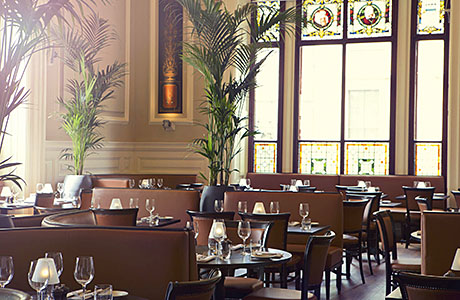 IT was love at first sight for husband and wife team James and Louise Rusk.

The pair, who run Glasgow steakhouse The Butchershop, had no idea what lay in store for them as they drove down the city’s Ingram Street two years ago.
But as soon as they set foot inside the A-listed Hutchesons’ Hall, they knew there was no turning back; the Rusks were smitten.
The subsequent two years have been spent extensively restoring and refurbishing the building, resulting in the launch, earlier this month, of café bar and restaurant Hutchesons.
It has been a long journey for the historic building.
Built in the early 19th century for philanthropist Thomas Hutcheson as a hospice for poor men, the property was taken on by the National Trust for Scotland in the 1980s and has been empty since 2008, when it suffered extensive water damage.
In the years since, the building had fallen into a state of disrepair, and the National Trust decided to seek new tenants that could breathe life back into the historic site.

From the first time they viewed the property, the Rusks were determined to be those tenants.
“You don’t get an opportunity like this,” James told SLTN during a sneak-preview of the new venue the week before the launch.
“So what are you going to say? No, this isn’t for me?
“Literally it took us a night [to decide to apply for the lease]. Actually, it didn’t take us a night, it took us the whole of two minutes, but you’ve got to talk these things through and pretend you’re actually thinking about it.”
With their hearts set on securing the lease, the Rusks didn’t take any chances. The bid document they submitted to the National Trust was a booklet that set out, in detail, exactly what the pair planned to do with the building. It was so thorough that, two years later, the finished venue has hardly deviated from it.
Driving these plans was the belief that a bar and restaurant was the best way for as many people as possible to experience the building.
“We are truly creating a purpose for this building now, because it will be alive every day,” said James.
“One of the great things about restaurants that can maybe be missed is that the doors are open, and people can enjoy the space on a continuing basis.”
But arriving at the finished venue was no easy task. In fact, it’s safe to say the restoration and refurbishment that followed was a labour of love.

You don’t get an opportunity like this. What are you going to say? No, this isn’t for me?

The project, which took two years to complete and cost £1.3 million (a mix of bank funding and money from the National Trust), required extensive repairs to the roof, ceilings, floors and walls – essentially every square inch of the place required attention.
“The boardroom (now café bar) panelling was there, but it was all a mess, the walls were all back [to stone], the roof was down,” said James.
“The doors were hanging off, the stonework was all back to bare stone. There was no flooring [at the entrance] – a bit of marble and then dirt all the way through. The pillars were all back to bare stone.”
Even this list understates the scale of the project, because Hutchesons’ Hall was no ordinary vacant unit.

Original decor, such as intricate cornicing on the ceilings of what are now the ground-floor café bar and the first-floor brasserie, had to be restored; as well as wood panelling, mosaic flooring and three original fireplaces.
And aside from the extensive restoration work, there was still the issue that the building had never before been utilised as a bar or restaurant.
“From the National Trust point of view the big jump of faith was actually taking on a restaurant rather than anything else,” said Louise.
But this new purpose for the building created its own challenges.
A kitchen had to be fitted and plumbed. Bars, one on the ground floor and one on the first, had to be designed and built. A dumbwaiter, vital for transporting food from the ground-floor kitchen to the brasserie on the first floor, had to be installed, as did an elevator for customers.
And then came the challenge of choosing furnishings that were practical and attractive for a restaurant, but also sympathetic to a building that is more than two centuries old.
To solve these issues the Rusks – now operating under the banner of The Rusk Company – worked with an extended team that included architects firm Hammond Pollock Partnership – the National Trust’s chosen architects – CM Design, Transition Interiors and Stevensons Upholstery.
“The building has done a lot of the work, and it’s been our job to be incredibly sympathetic in the choices of colours, textures, design and offer we have made,” said James. 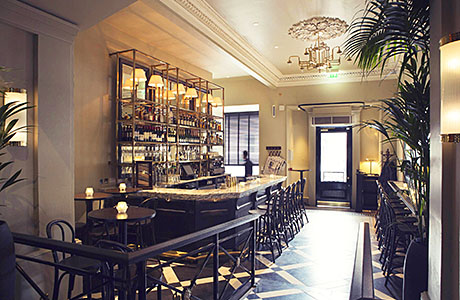 Customers entering the ground-floor café bar are greeted by a combination of dark wood, tiled floors and a tall, warmly-lit gantry.
The sizeable bar incorporates both light and dark, with a classic-looking mahogany frontage and marble top.
Inside, the café bar contains long booth seating and hard-backed chairs arranged around small, marble and wood-topped tables and mirrors that have been intentionally marred to make them appear older than they are.
Upstairs, the building’s grand hall – the brasserie – is a long, bright space populated by more custom-made seating arranged around heavy, iron-legged tables.
While there are many eye-catching aspects to the room, including restored fireplaces, tall windows bordered with stained glass and gold chandeliers, the room is arguably dominated by two things: one a new addition, the other a long-standing feature of the building.
Built by Transition Interiors, the brasserie’s pewter bar is a significant addition to the space, spanning almost the entire breadth of the room.
The steel-topped bar is accompanied by a sizeable, mirrored gantry with each shelf individually lit and the lower sections concealing fridges and drawers disguised by traditional-looking wood doors and iron handles.
But the painstakingly restored ceiling, which features intricate cornicing and artistry, is likely to draw the eye of any customer that sets foot in the room.
James said the object of the exercise was to create a venue that looked “like it’s been here a long time”.
“I don’t like over-design,” said James.
“It’s kind of anti-design design. You know everything’s been thought out but you don’t feel like you’re sitting in a design exercise.
“It’s timeless. This would have been fine ten years ago, as it will be twenty years from now.”
And the project isn’t over yet.

While the ground and first floors and now open for business, a private dining room on the building’s second floor is currently being developed in conjunction with family-owned distillery Glenfarclas. It will be complete in the coming months.
With the project approaching completion, James said the nerves began to set in.
“For us the big pressure is not letting everyone down,” he explained.
“When you start the process, you’re not thinking of that. But as it goes on you realise how important it is, that what you’re doing really matters.
“A lot of people have a lot of history with this building.”
Getting the look and feel of the venue just right was vital, but it wasn’t the only challenge.
The food and drink offer is designed to appeal to a broad range of customers, from people popping in for a coffee and a bite to eat in the morning (the café bar opens at 9am every day) through to lunch snacks, and a full evening meal.
Light bites in the ground-floor space range from breakfast pastries and Eggs Benedict to burgers and sandwiches, while upstairs in the brasserie (open from 12noon) the full a la carte menu has a strong focus on steak and seafood, including whole seabass, whole baked Scottish lobster, a half kilo cote de boeuf (aged 35 days) and Chateaubriand.
On the drinks side, the offer ranges from traditional and signature cocktails to Birra Moretti and Heineken on draught, these latter delivered via an under-bar draught system installed in the absence of a beer cellar.
The Rusk Company worked with Inverarity Morton on spirits and Heineken on beer and cider.
Wine is a key component of the drinks offer and here, again, the selection is designed to appeal to a broad range of tastes.
Working with Bibendum, the Rusks compiled a list of around 70 wines, with eight whites and eight reds sold by the glass.
James said the experience of having worked with these suppliers at The Butchershop stood the team in good stead when preparing the food and drink offer at Hutchesons.
“We’ve got such an incredible relationship with our suppliers, and they know the quality-driven aspect of everything we do,” he said.
“That’s incredibly important and it means you’re not trying to re-explain it.”
It’s been a long journey for Hutchesons’ Hall, the National Trust for Scotland and The Rusk Company but, with the doors now open to the paying public, all that remains is for Hutchesons to deliver on the vision James and Louise have held for more than two years.
“Our strapline was ‘the new Glasgow classic’,” said James.
“We’d better live up to that, or it’s going to be really awkward.”

“We carried out the full joinery shopfit, along with installing the kitchen and the bars. James and Louise knew exactly what they were trying to create: a look sympathetic to the age of the building and a classic eatery. We helped realise their vision.
“This is a stunning new venue in the heart of Glasgow and credit to James and Louise for their help saving one of Glasgow’s most iconic buildings and turning it into a restaurant worthy of any top European city.”
– Stephen Brownlow, managing director, Transition Interiors.

“The brief was to design an exciting, sexy, but classic environment for both dining and cocktails. James and Louise were heavily involved with the project from the start, in the layout, selection of finishes, furniture and lighting.
“We had to make sure that our design was sympathetic to the building and feel as though it had been a restaurant/bar for years.
“We are proud of being part of the team that has brought this wonderful building back to life.”
– The team at CM Design.