Websites such as Twitter and Facebook can be effective marketing tools for hospitality businesses, writes Paul Smith of Barclays 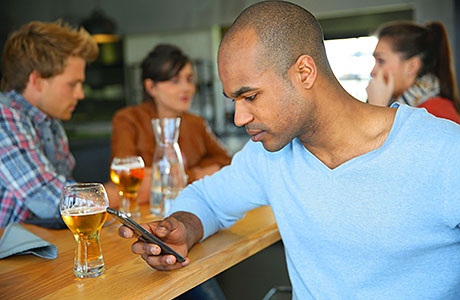 AS a relationship business, the hospitality and leisure industry shares a key objective with social media, which is interaction and engagement.

Customers are increasingly being influenced and informed by social media, be it by the two most popular platforms used by hospitality and leisure businesses – Facebook (79%) and Twitter (46%) – or the wider array of channels tailored to other forms of communication such as video and picture-led content.
Social media has an impact whether businesses choose to engage or not. Usage trends are quickly moving upwards with 60% of people making use of social media at least once a day, and 69% of online shoppers across all age groups actively engaging on social media platforms.
Accessibility has also supported the significant strides social media has taken in recent years, encouraged by increasingly sophisticated smartphone devices and tablets.
According to Ofcom’s most recent Communications Market Report, ownership in Scotland increased by 13% in 2013 to 45% of all adults. The same report also noted that tablet ownership has more than doubled in the past year, rising from 11% of homes to 24%.
The average household now owns more than three types of internet-enabled device, with one in five owning six or more.
Research carried out by Barclays also demonstrates a clear link between social media and sales, with 21% of consumers being influenced to some degree, with 19% of this group believing that the sale was directly generated by social media activity.
These are encouraging statistics considering online social activity is still in its relative infancy and, therefore, as a channel of influence this can only look to gain further momentum. This is particularly true for travel, leisure and food where social media is already swaying purchasing decisions.

Social media is a low cost and fairly simple to manage marketing tool.

In light of this almost instant and often personal relationship with companies, consumers have come to rely on networks and sites such as Facebook, Twitter and TripAdvisor to give feedback as well as communicate directly with in-house personnel to praise, query or complain. These sites are equally used to provide peer to peer recommendations for everything from hotels to pubs, restaurants and local attractions.
It is, therefore, key for the industry to respond to this feedback and recommendation process quickly and constructively.
Online is a public way of giving negative feedback but is also a public way for companies to show how well they deal with this; it should be viewed as an opportunity.
Our research established that 74% of online customers discover new services through reviews and 35% of online customers base purchasing decisions on social media sites.

Social media is a low cost and relatively simple to manage marketing tool, which can be used effectively to drive proactive and creative engagement with consumers. As such, small to medium sized businesses now have an opportunity to compete with larger firms for a fraction of the cost of traditional mass marketing.
Social media is everywhere and for many businesses it not only influences and directly generates sales, but provides a personal link with consumers.
This is vital when consumers are increasingly cost-conscious and discerning about where they choose to spend their hard-earned cash.
With 58% of hospitality and leisure firms believing their influence will further increase, the message is clear: it’s time to get social.
• Paul Smith is corporate development director at Barclays Corporate Banking, Scotland.