AS one of Edinburgh’s busiest transport hubs, the Haymarket area attracts a huge cross-section of consumers every day.

And this is something Belhaven owner Greene King is keen to tap in to with its latest outlet in the Scottish capital.
Platform 5, its name inspired by the four platforms at nearby Haymarket Station, opened its doors at the beginning of this month, targeting a broad spread of locals and passing trade.
Part of the company’s growing estate of managed properties, the bar is located beneath the city’s Tune Hotel and across the street from a newly-created tram station. 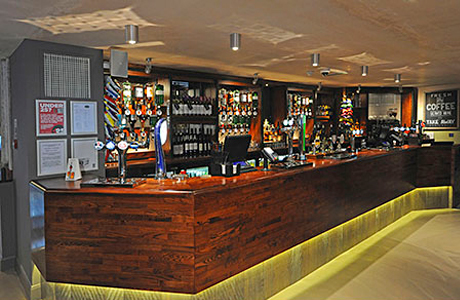 Previously a retail unit, the premises was transformed into a contemporary bar split across two levels during the 12-week refurbishment – a project which involved extensive structural work to install, among other things, disabled lifts, ventilation for the venue’s kitchen and beer pythons for the bar’s range of draught products.
Working in conjunction with Greene King project manager Brian Edwards, the bar was created by a team that included Burns Interior Design, contractor Hugh Stirling, surveyor Cobb McCallum & Co and structural engineering firm Ramage Young.
The resulting interior makes use of stripped back wood and brick surfaces and combines open, airy spaces with a range of long tables and booth seating.

We looked at what was happening in London and New York, that stripped back interior.

The nearby transport links are referenced in a hand-painted mural by artist Nichol Wheatley, which features different railway stations from across Scotland.
Ronnie Burns, of Burns Interior Design, said the concept was to create a space with different areas that appeal to different groups of customers. This is further reinforced by the long, wood-panelled bar, which was designed to showcase the full range of the venue’s drinks offer.
“For Platform 5 we looked at bars and what was happening in London, some commercial units in New York, that kind of stripped-back interior,” said Burns.
“Some might call it industrial, but it’s just a bit more stripped back. But you contrast that with good furnishing elements.”
Functionality was a consideration throughout the design of the premises, said Burns.
“I think at the end of the day the bar’s got to be functional,” he said.
“There’s a long bar, with a good display of the product; there’s a range of chairs – from comfortable higher chairs to high stools – and a selection of tables and booths. 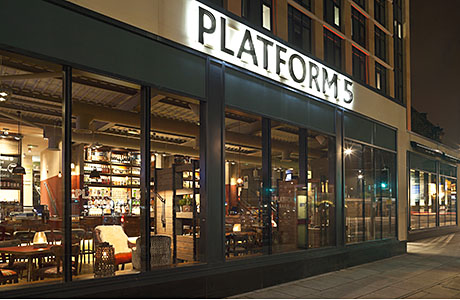 “So you’re offering the customer a real choice of different zones and seating styles they can choose from.
“One of the things is longer sharing tables, so you can get 14 people to group together.”
Burns and Hugh Stirling have worked with Greene King on a number of previous projects – including the recent creation of the company’s Hungry Horse venue in Clydebank, The Titan.
Angus Alston of Hugh Stirling said the close working relationship cultivated on these projects paid dividends during the refurbishment of Platform 5.
“We have an excellent working relationship with Burns Design with a real team effort to get the best detailing and finishes,” said Alston.
“Throughout the project the team at Burns will regularly come in to our workshop to discuss or adjust details and finishes as fitments are being manufactured and polished.
“It was also particularly useful us having our own steel fabrication workshop, as the design involved a number of intricate metal screens and a feature steel frame back gantry, all of which could be built in-house to Burns Design’s exacting standards.”
But while the close working relationship between the various firms helped to ensure things went smoothly, the project wasn’t without its challenges. 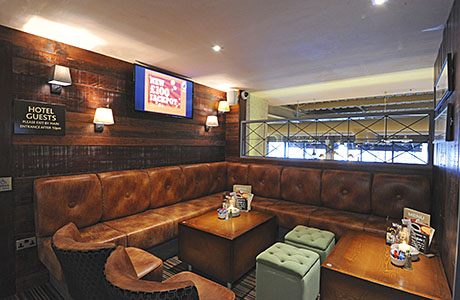 Alston said the floor-to-ceiling heights provided problems in terms of routing the duct work and kitchen ventilation, while the bar’s location, in the same building as the Tune Hotel, put pressure on the team to keep noise to a minimum – a particular challenge towards the end of the project, when construction work was being carried out around-the-clock.
The hard work paid off in the end, producing a bar that is able to offer food from 7am each day and an extensive draught offer that spans 15 different beers, including the company’s own Belhaven Best and Greene King IPA brands, as well as a selection of beers from local breweries.