A range of beers that cater to lighter tastes, served cold, will put fizz in sales 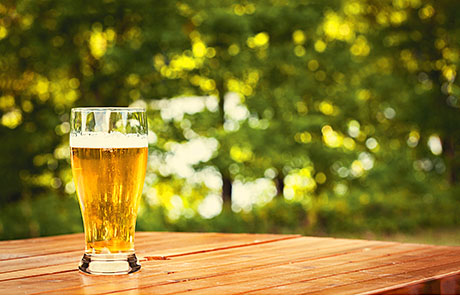 Although other drinks, such as wine and fruit cider, have proven popular with consumers in warmer weather, beer firms are adamant that a cold beer can be just as refreshing on a sunny day.
While there will be die-hard beer drinkers who will stick with their usual pint regardless of the season, brewers said there will also be those who look to lighter styles.
Hugo Mills, director of sales and operations for Scotland at Molson Coors, the firm behind Cobra, Carling and Coors Light, said lighter beers can prove popular in summer “as the focus for customers is refreshment”.
“To this end, unique flavour varieties that offer more sweetness become popular,” said Mills.
“Meanwhile, the more traditional beer drinkers will generally stick to their preferred brand, irrespective of the season.
“In order to cater for both markets publicans need to ensure they always stock a wide portfolio of drinks and beers to appeal to a wide spectrum of tastes.”

We move away from porters and stouts towards floral and fruit flavours.

In response to these broad tastes, many brewers ensure they offer publicans a range of different styles of beer.
“At West we certainly tailor our seasonal products to the need for a thirst-quenching drink in the summer, which means moving away from porters and stouts and towards more floral and fruit flavours,” said Petra Wetzel of Glasgow-based bar and brewery West.
“People certainly gravitate more towards beers that are light in colour during the summer.
“Our Hefeweizen is particularly popular when the sun is out because it has brilliantly refreshing banana flavours, whilst offering much more complexity and depth than a cider or long drink.”
Wetzel added that lower-ABV serves, such as shandy or the emerging ‘radler’-style beers, can also prove popular during warmer weather.
And there are opportunities for licensees to provide different twists on these drinks to offer a point of difference.
“One popular variety of radler in Germany is mixing wheat beer with either lemonade or cola, which is still pretty alien to Scottish drinkers,” said Wetzel. “So there are always ideas from abroad which licensees can use to help create a degree of difference.”
The standard of serve will be just as important as the range of beers on offer, and brewers have advised publicans to ensure their beer is served cold and in the correct glassware.
John Gemmell, trading director for Scotland and north east at Heineken, parent company of Foster’s, Heineken and Kronenbourg, said although the company sees a spike in cider sales over the summer, the season remains a “massive” occasion for beer.
But he described the temperature of the beer as “crucial”.
Gemmell said the company will be promoting its own Heineken Extra Cold draught product this summer, and encouraged licensees to focus on the combination of “chilled beer into a branded glass, that is already chilled”.
“So for any licensee in the summer, the key thing is the temperature they’re able to dispense beer at,” he said.
And a properly chilled and served beer can help keep customers in the category, instead of venturing into rival areas such as cider, according to Jeremy Houston, national account manager at Innis & Gunn.

For any licensee in summer, the key is the temperature they’re able to dispense beer.

“Drinks served over ice definitely flourish in the summer, but equally a well-served, properly chilled lager in the right glass will encourage a beer drinker to stick to beer,” said Houston.
“Consumers have high expectations when it comes to serving any kind of drink nowadays, so this definitely applies to beer.
“Don’t go near a glass that’s just come out of the glasswasher. A branded glass is definitely an advantage but make sure you are using the right glass.”
At a time of year when home barbecues are at their most popular, it is vital to offer customers the best quality pint to give them a reason to head to the pub instead of just into their back garden.
“It is vital that publicans ensure their cellar cooling system is serviced and working well during the summer in order to serve a refreshingly cool pint,” said Dom South, marketing director for Greene King Brewing and Brands, parent company of Belhaven.
“Perfect serve is critical at any time of year.
“The delicious pint that can’t be recreated at home is one of the biggest reasons for people to come out to the pub, particularly in summer time when there are so many other attractive ways for drinkers to spend their leisure time.”