Upper floor of restaurant relaunched as venue in its own right

The businesswoman behind the Ashoka Ashton Lane in the city’s west end, Aksi cut her teeth in Italian restaurants before moving on to run Indian eateries for Glasgow-based Harlequin Leisure Group.
What makes the latest venture, The Indian Platform, a little different is the fact that it’s based in the same building as Aksi’s Italian Bistro restaurant.
Located directly above the Bistro in an area that was previously used for functions (and even spent some time as a retail space), The Indian Platform operates as a stand-alone restaurant, with its own menu, chef and staff.
Located on Great Western Road, beside Gartnavel Hospital, the restaurant takes its name from the original incarnation of the building, as the long-closed Kelvinside Railway Station.

“I thought that it was different from everyone else calling their places masala this or chilli that,” Aksi told SLTN.
“It is something specific to the building.”
The conversion of the space, which took around two weeks, included the fitting of a brand new kitchen, while front of house the restaurant benefitted from new flooring and tables, and re-upholstered seating.
Images of India hang on the walls, accompanied by Indian-inspired ornaments.
And according to Aksi, there’s not a lot of difference between running Indian or Italian restaurants.
“Your GPs, your buying and your staffing – the whole thing fits into the same category, it’s just different people you’re buying from,” she said.
“The restaurateuring is just the same. So we just thought ‘let’s try it, let’s take a chance’.” 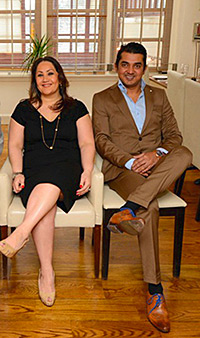 The Indian Platform, which opened its doors in March, is helmed by general manager Chetain Parmar, who has worked with Aksi for over a decade since emigrating to Glasgow from his native India.
“A lot of customers know Naz and they were coming in and asking ‘why don’t you have an Indian here?’” said Parmar.
“There was a lot of customer feedback saying we should open one.”
The menu at The Indian Platform was a collaboration between Aksi and Parmar.
As well as dishes known to be popular with the Glaswegian customer base, the selection includes lesser-known options.
“Along with the kormas and chasnis, we wanted to introduce dishes that people may not have tasted before,” said Parmar. “The new items are selling better than we expected.”
And although there isn’t much competition in the immediate area, the number of restaurants throughout the city means there is pressure to get the offer just right, said Parmar.
“Now, in Glasgow, in the UK, the right menu, the right presentation and the right price point is important, because people won’t pay £20 or £50 for a curry,” he said.
“There’s a lot of competition nowadays around Glasgow.
“We want people to come here and come back, so you have to have the best chef, the best menu.”
And while the food offer is distinct from the downstairs sister restaurant, if a diner prefers Italian cuisine to Indian, they are free to order from the Italian Bistro menu instead of The Indian Platform selection.
This is also true of the drinks lists, with Inverarity Morton supplying both venues. Although the beer range, which includes Cobra and Peroni, is the same in the Bistro and the Platform, the wine range has been tweaked to suit the Indian cuisine.
“We had to pick a lot of wines that we have used in Indian restaurants before,” said Parmar.
“Some wines are the same, because some people just like the wine, and actually most of the Italian wines do go well with Indian food as well. It’s not completely different.
“But some people do like their wines a bit heavier, a bit more full-bodied, with Indian food.”
It’s shaping up to be a busy year for Parmar. As well as running The Indian Platform, he is also in the process of rolling the brand out internationally.
A Singapore version of The Indian Platform is due to open in the coming weeks. Run by contacts of Parmar who are based in the city-state, it will feature the same standard menu as the Glasgow restaurant, along with some dishes popular with the Singapore locals.
“Singapore is a booming market,” he said. “Glasgow is now saturated. You need to find more places to open.”