PUB giant JD Wetherspoon has reopened a pub and hotel on the outskirts of Dundee after a claimed £2.23 million investment.

Jolly’s Hotel, in Broughty Ferry, opened earlier this month, several years after its former owner went into administration.
The property, which dates back to the mid 19th century is named after original owner John Jolly, who ran the business from the 1850s until 1871.
The property had been closed for some time when Wetherspoon purchased it last year. SLTN reported at the time that Wetherspoon had bought the building from an asking price of £950,000.
Following the refurbishment the ground floor pub now features a bar, an open kitchen and a courtyard-style beer garden with designated smoking area.
Images and artwork relating to local history appear throughout the interior of the premises, as well as information boards related to famous characters and events from the locality. 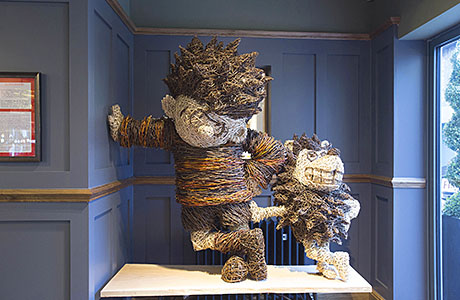 In a nod to newspaper publisher David C Thomson, who lived in Broughty Ferry, there are wicker statues of DC Thomson comic book characters Dennis the Menace and his dog, Gnasher.
Real ale is to be a major focus for the pub, which will stock a selection of different beers from local and regional brewers, as well as food, which will be served every day until 11pm.
While children are allowed in the pub until 8pm if they are accompanied by an adult, a condition of the premises licence states that both the adult and child must order a meal if the adult is consuming alcohol.
The pub is open from 7am until midnight Sunday to Thursday and 7am till 1am on Friday and Saturday nights.
The hotel side of the business, meanwhile, is set over two floors and has 25 en suite bedrooms.
Wetherspoon claims the opening of Jolly’s Hotel has created 60 new jobs in the area.
Prior to the launch, manager Chris Bankier said: “Myself and my team are looking forward to welcoming customers into the pub and we are confident that it will be a great addition to the Broughty Ferry community.”
The opening of Jolly’s Hotel brings Wetherspoon’s Scottish estate up to 65 sites, following the opening last month of Alloa pub The Bobbing John.
However, the Broughty Ferry property is only the company’s fourth Scottish outlet to include accommodation as part of its offer.
Fife outlet The Golden Acorn, The White Lady in Edinburgh and Inverness property The King’s Highway also feature letting rooms.
In the coming months the company has plans to open further Scottish sites in Dumbarton, Stirling, Peebles and Fraserburgh.