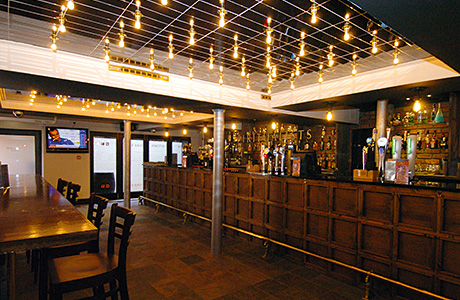 THE common thread between Mark Lappin and Paul Bright’s first two Glasgow ventures has been a love of music, so it’s fitting that the bar to follow Maggie May’s and Slouch should take its name from one of the ‘grandfathers’ of modern music.
Opening on Bath Street in the former Monkey Bar unit last month, The Howlin’ Wolf is named after a man who was at the heart of the Chicago blues scene.
However, Lappin and Bright are quick to stress it is not a theme bar.
“We’re a juke joint, the kind of place where people used to go to listen to music and have fun,” said co-owner Paul Bright.
“A theme bar is so limited.”
Mark Lappin, whose first foray into the Glasgow trade was with live music venue Maggie May’s, echoed the importance of music to the new bar concept.
“We’re all big music fans,” he said.
“One thing we noticed about every big band is they all said Howlin’ Wolf was a big influence on them.
“So we can play anyone we want here and we can trace it back.”
Theme bar it may not be, but the blues still managed to find their way from the DJ box to the drawing board during the venue’s refurbishment.
Reproductions of original Howlin’ Wolf posters sourced from music memorabilia archive Wolfgang’s Vault can be found dotted around the venue and on the bar’s menus.
And portraits of blues icons painted by local artist Jim Byers hang from the walls by the bar’s red leather chesterfield booths, which were supplied by Thistle Upholstery.
The revamp, a collaboration between Paul Martin Joinery and the venue’s owners, involved the use of reclaimed materials throughout; scaffolding beams were used to construct frames for booths and to support the venue’s large central table, while reclaimed flooring features on one wall.
The bar top is made from slabs of black granite, while the back wall features reclaimed tumbled stone.
Overhead, an array of light bulbs have been used, which reflect on the black roof tiles.
“We had looked at tiles for the exterior [walls] but they didn’t fit in,” said designer Paul Martin.
“Then we had a flash one day that we could do it on the ceiling.”
And it seems the new look, which took five weeks to complete, was well received by customers at the launch party last month.
“It’s such a sharp contrast from what it was that everyone was blown away,” said Bright.
It wasn’t just the bar’s interior that was revamped.
On the drinks side of things, where sister venue Slouch impressed SLTN Awards judges with its extensive range of rums, The Howlin’ Wolf could be on course to make a name for itself among draught beer aficionados.
With beers sourced from Tennent’s, Heineken, Coors, West, Dameck and Matthew Clark, the bar’s free of tie status allows Howlin’ Wolf management to “buy in what we’re passionate about”, said Bright.
Lappin’s passion for German beer is manifest at the bar in the shape of a traditional double tap Paulaner font dispensing the brewer’s Muncher and Weissbier; at the opposite end of the bar, Heineken’s newly rolled out “served extra cold” font catches the eye with it’s illuminated signage and frosted pillar.
And it’s not all about beer at The Howlin’ Wolf.
There are around 150 bottles of spirits, available either as single serves or as part of the venue’s blues-themed cocktail menu.
Going forward, Lappin said he’s keen to work with other operators in the area to develop Sauchiehall Lane, where The Howlin’ Wolf’s rear entrance is, along the lines of Glasgow’s Ashton Lane.
“We’ve got ideas for the lane,” he said.
“If the council goes along with it, it could be great. The guys next door [Malones] are keen to get involved,” said Lappin, adding that he had already spent £500 on flowers for the lane “to soften it up”.
Although the team has ambitious plans for the future of The Howlin’ Wolf, Bright and Lappin’s main focus is still on creating a great bar experience.
“What we’re going to try and do is serve great food and drinks in a safe atmosphere,” added Lappin.