A RECENTLY-restored, 19th century hotel on the west coast of Scotland has come onto the market.
The Salen Hotel, in the west coast village of Ardnamurchan, comprises a public bar, dining room and a newly-built, oak-framed conservatory, along with five en suite letting bedrooms and private owner’s accommodation. 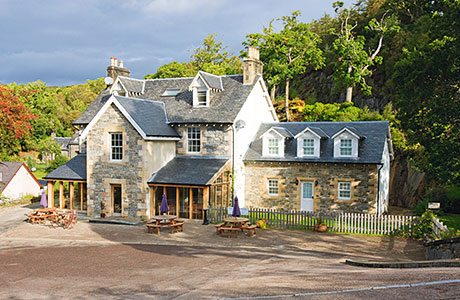 The property is said to provide views of nearby Loch Sunart.
The sale includes an adjoining two-bedroom self-catering cottage, completed in 2008, as well as a workshop/storage space, beer garden and barbecue area and ample on-site car parking.
The hotel itself has a fully-equipped commercial kitchen and preparation area, chill store and beer and wine cellar as well as a laundry.
Gregor King, consultant at selling agent Bell Ingram, said properties like the Salen Hotel are a “one-off”.
“Its idyllic location in one of the most remote and unspoilt areas of Scotland ensures tourists from around the world are enticed by its stunning surroundings throughout the year,” said King.
“The hotel – which has been painstakingly restored and upgraded over the last few years – is full of character.
“The property is ready to move into but there is also plenty of scope for further development to maximise the potential of the business.”
The Salen Hotel is on the market for £745,000 plus stock at valuation.