OPENING a Tiki bar and restaurant in Glasgow was nothing new to Pacific co-owner Ian McColm.

Having launched Tiki Bar and Kitsch Inn on Glasgow’s Bath Street in 2010, Ian was well prepared for a smaller, follow up venue in the city’s Partick area.
Pacific, which opened its doors on Dumbarton Road last month, will have a familiar feel to anyone who has passed through the doors of the Bath Street venue.
The bamboo-dressed bar is in place, as are the hanging puffer fish lights and the selection of rum bottles on the back-bar.
But Pacific is a sightly different beast to its older sister.
While Tiki Bar is primarily an evening venue, 39-cover Pacific is targeting daytime – and even morning – trade as much as the evening crowd. The bar opens at midday Monday to Friday and 10am at the weekends.
“Because it’s so small, we want to be able to take it from café, to restaurant to bar,” Ian told SLTN.
“That’s how you’re going to maximise your revenue. We’ve tried to design it that way.
“We get a lot of lovely old ladies in in the mornings at weekends. Then the lunch crowd come in, then the dinner crowd, then we dim the lights, turn the music up and get a more Tiki bar atmosphere till 1am.”
Formerly the American diner-themed restaurant New York Kitchen, and before that Pintxo, the process of converting the unit into a Hawaiian-inspired Tiki bar involved a complete re-design of the space.
Working with Glasgow-based shopfitter Make Contracts, Ian and business partner Billy Milligan constructed a new bar by the venue’s door, cutting into the wall behind the bar to create more storage space for the outlet’s 40-plus rums.
The walls have been dressed with Hawaiian-style Lauhala matting, while wood from reclaimed scaffolding appears on wall panels, as well as tabletops and even the bar top itself.
The seating arrangement has also been tweaked, with tables of four replaced by smaller tables of two, which line both sides of the unit.
“I learned this the hard way from Tiki Bar,” said Ian.
“What you need in restaurants are tables of two, so you can make it into a six, a four etc.”
Having received the keys to the property in December, Ian and Billy were able to trade it as New York Kitchen for several weeks before the renovations began. Opening Thursday to Sunday, work was carried out at the beginning of the week while the unit was closed.
“We had one week where it was a very Tiki-looking New York Kitchen,” said Ian.
And although the look of the venue is very different, remnants of the former outlet remain.
“We’re a neighbourhood joint here, so we’ve kept the brunch menu, which was very popular with New York Kitchen,” said Ian.
“We’ve put the most popular Thai dishes on (from Tiki Bar), homemade burgers and fish tacos.”
Thai dishes include corn fritters; rendang (Thai-style curry); and sharing platters, for £12 (or £10 for vegetarian), while the range of ‘Big Kahuna Burgers’ includes the Pacific Beef Burger and the Kalua Style Pulled Pork Burger.
The drinks list, too, takes some of its inspiration from Tiki Bar, with some cocktails appearing on both lists while others – such as the Pacific Paloma and Nuclear Banana Daiquiri – have been developed specifically for Pacific.
The drinks side, too, has been easier this time around, said Ian, with suppliers already familiar with the team from dealing with them at Tiki Bar.
Spirits are sourced from Inverarity Morton, with wines from Enotria and Matthew Clark/Molson Coors supplying the bar’s beer range.
As to the future, Ian said there is potential to roll the concept out in other locations around Scotland.
“There’s no space in the west end or city centre for any more,” he said.
“I’d look at a small one in the south side, but other than that it’s Edinburgh or Aberdeen.”
Because it’s so small, we want to take it from café, to restaurant to bar throughout the day. 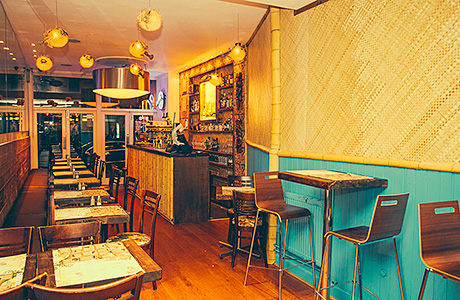