Believe it or not, expanding restaurant business Cook & Indi’s World Buffet can trace its roots to a petrol station in Uddingston.

The company, a chain of buffet restaurants where customers can choose from a number of different cuisines, including Indian, Chinese, Italian and Japanese, was formed by Cook Gill and Indi Singh in 2011.
Having worked in Indian restaurants for years – Cook with brother Charan at Harlequin Restaurants, Indi in his father’s restaurant in Uddingston – the pair had separately decided to leave their respective employers and strike out on their own.
The timing was serendipitous, to say the least.
Indi had already trialled his idea of a buffet-style restaurant offering a range of different cuisines with his father, and was keen to expand the concept on his own terms while Cook, after 25 years with Harlequin, wanted a fresh challenge.
Then came the petrol station.
A chance meeting between friends led to a more detailed conversation about Indi’s concept and, within 48 hours, Cook & Indi’s World Buffet had secured its first site.
“I always had this vision of having a lot of restaurants,” Indi told SLTN. “And it was a great chance for me to work with Cook, who had done that already.” 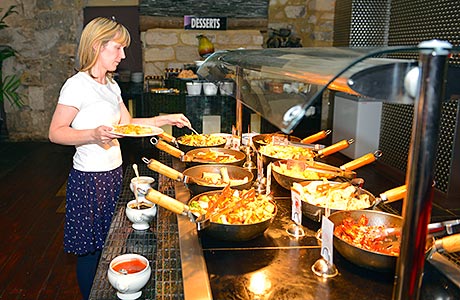 The company operates restaurants in Hamilton, Johnstone, Darnley, Bishopbriggs and Glasgow (on Sauchiehall Street and Renfield Street), with plans to open a further three – in Motherwell, East Kilbride and Edinburgh – later this year.
And although the expansion has been fast, the company has been able to self-fund each new outlet.
“What’s happened is we’ve opened Hamilton, it’s been successful, and then Hamilton’s funded B, B has funded C, and C has funded D, and it’s worked really well for us,” said Cook. “We had a meeting with the banks in November last year, and they’re wanting to give us money.
“I don’t want their money.”
Value is a cornerstone of the World Buffet concept (lunch costs £5.99 per person, with dinner £10.99 per person on week nights and £12.99 at weekends), and this has been key to the company’s success, said Cook.
“In 2011 the recession was really bad and I remember saying that people can’t afford £20 per person for an a la carte restaurant, so we need to diversify,” he said. “Gone are the days where you wanted just quality. These days people want to fill their plates up and eat for virtually nothing, rather than a fancy plate with two or three potatoes on it.

I think you’ve got to broaden your horizons, do something different.

“So we asked ‘what are the public wanting, in this day and age?’ The whole thing tied in together, and we’ve never really looked back.”
The pair refuse to rest on their laurels, however. In addition to opening more restaurants this year, there are also plans to introduce new cuisines to the existing units, and they are in each unit, every day, thinking of ways to make the offer better.
“I think you’ve got to look at broadening your horizons, doing something a bit different,” said Cook.
It’s a philosophy that appears to have served the business well.