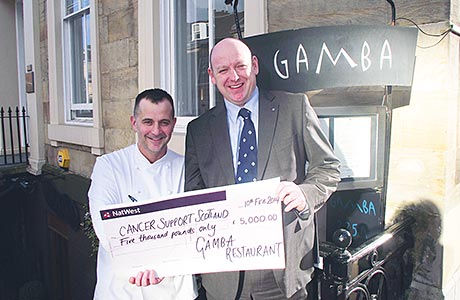 A RESTAURANT in Glasgow city centre has raised more than £5000 for a Scottish cancer charity.

The team at Gamba, on the city’s West George Street, presented Cancer Support Scotland with a cheque after three months of fundraising, which included a charity dinner in November as well as donations from customers.
Guests at the dinner paid £50 a head for a meal that included dressed, hand-picked white Portland crab meat with horseradish, red pepper and smoked caviar, and a main course of Isle of Gigha halibut with peat smoked haddock.
The fundraising continued throughout December and January when the restaurant added £1 to the bills of willing diners.
“Our customers recognise that it’s important to support the local community and have backed our fundraising 100%,” said Gamba owner and head chef Derek Marshall. “This time of year can be hard for those in the third sector, with Christmas and the long wait to pay day in January, but it’s imperative that they receive the finance to thrive and provide the outstanding work they do.”
Colin Graham, chief executive of Cancer Support Scotland, said the charity’s work “would not be possible” without support from businesses.
“Thank you to Derek and his team for choosing to fund our work and help us to reach families in Scotland in need of our support,” he said.