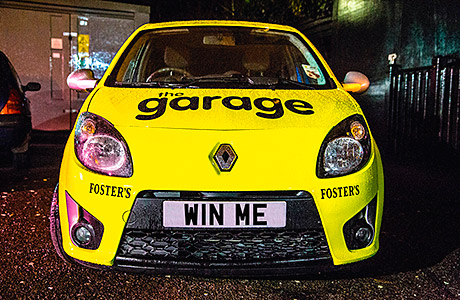 The Garage, on Sauchiehall Street, hosted a special 20th birthday party on Friday February 28.
As well as drinks, birthday cake and music from the past 20 years, the celebration gave customers the chance to win a range of prizes that included a Renault Twingo (pictured), a holiday for two and a new PlayStation 4.
As well as operating as a nightclub, The Garage has positioned itself as an entertainment venue over the past two decades, having hosted live music acts such as Prince, Marilyn Manson and One Direction and comedians that include Frankie Boyle and Daniel Sloss.
The Garage’s parent company also owns Glasgow nightclubs The Cathouse and The Tunnel.