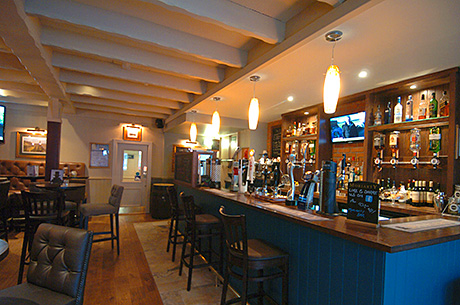 WITH the continued popularity of the BBC’s Sherlock Holmes adaptation, it was probably only a matter of time before one of Arthur Conan Doyle’s characters made the jump to the Scottish licensed trade in one form or another.

A little more surprising, however, is that the husband and wife team behind newly opened capital bar Moriarty aren’t actually big fans of the famous Edinburgh-born writer.
The naming of their new bar wasn’t intended to be a tribute to Holmes’s nemesis, the fiendish professor Moriarty. They just liked the name.

Leased from Punch Taverns, the bar, on Edinburgh’s Lothian Road, previously traded as Anderson’s, before the pub company began looking for new tenants.
Taking on the lease was a life changing move for Nick and Joy Madigan, who had been working in financial services (Nick) and nursing (Joy), but one they were keen to sink their teeth into.
“We had looked around to take on our own business and it’s always been a dream of mine [to own a bar],” Nick told SLTN. “I grew up in the area, and this is one of the first pubs that I came to. It’s changed a lot since then, but when we saw it had become available it was just something we wanted to do.”

There’s a lot of offices in the area so our real target market is young professionals.

The subsequent six-week refurbishment, undertaken in conjunction with architectural firm Davidson Baxter Partnership and Donaldson Construction, was carried out with the aim of repositioning the venue in order to make it more appealing to a younger demographic.
“There’s a lot of offices around and a lot of the banking industry, so our real target market are young professionals in the area,” said Nick.
“There’s a lot of students as well. We’re just trying to bring the average age of the [customers] down from before.”
The refurbishment included extensive alterations to the front of the building, where a former office room was removed in order to create more space and also to allow the installation of larger windows to admit more natural light.

Inside, design work was more about dressing the existing space rather than any dramatic changes to the structure of the building.
“We had an idea of what we wanted, and how we wanted the bar to look, and we’re really happy with the design,” said Nick.
‘Old Edinburgh’ is very much the theme in the bar’s interior.
Tweed covers much of the furniture, while pictures and photographs from the city’s past feature prominently on the walls.

A lot of people coming to the bar are Sherlock Holmes fans. It’s one reason they’ve been intrigued by the place.

Behind the bar, the wall has been stripped back to its original brickwork, and lights hung from the outlet’s exposed rafters.
“The feedback we’ve had from customers is that it’s a really homely pub,” said Nick.
Other than the name of the outlet, the Conan Doyle influence is subtle.
A silhouette resembling the villainous professor Moriarty features on menus, and there are one or two other nods throughout the venue. However, this is something the Madigans may expand on in the months ahead, said Nick.

“We didn’t want to go too heavy on the Sherlock Holmes theme, but we do have a few references,” he said.
“Beside the gents toilets we have the guy’s head with the cap and pipe, and for the ladies it’s an old Victorian-style picture.
“So we do have some Sherlock Holmes things in there. To begin with we weren’t too keen on going full-on with that, but now we’re in we’re going to actually add a bit, because I’ve found that people who are coming to the bar are Sherlock Holmes fans and that’s one reason they’ve been quite intrigued by the place.
“We’ve been quite surprised by the popularity of Sherlock Holmes and the interest in him so we might do a bit more on that.
“We’re not massive fans, but we really liked the name and obviously there is a link there with Edinburgh.”
The physical redesign of the outlet has only been part of the project, however.
On the drinks side, the Madigans are looking to broaden the appeal of the outlet with a draught selection that includes Estrella Damm, Deuchars IPA and Addlestones cider and a robust spirits range that features brands such as Russian Standard, Tanqueray, Edinburgh Gin, Jura and Glenfiddich.
There is also a selection of cocktails that incorporates favourites such as the Mojito, Cosmopolitan and White Russian.
And while the venue doesn’t have a full kitchen, food is also an important part of the outlet’s all-day offer (Moriarty opens at 9am Monday to Saturday, and 10.30am on Sunday).
The menu features a range of food that includes paninis, salads, soups and cheeseboards.
“We wanted to change the offer here, to get people in for food and coffees and make it more friendly to young professionals and women around the area and just make it a really cosy and friendly pub,” said Nick.
Functions and events, too, are expected to form a core part of the bar’s business. The property features a downstairs bar area that can be employed either as a venue for events or as an overflow area for the upstairs bar on busier nights.
And although new to running their own bar, the couple claim to have hit the ground running.
“We opened the day before Black Friday, which was definitely a baptism of fire,” said Nick, “Touch wood, but I don’t think we’ll ever have a tougher weekend than our opening weekend.”