Scotland’s independent breweries are booming, but the industry could benefit from collaboration, writes accountant Adam Hardie

We now have over 70 craft brewers across the nation, reminiscent of the halcyon days of the early 20th century, when Edinburgh alone had more than 35 operating breweries.
Breweries such as Stewart Brewing, Fyne Ales and Broughton Ales are emerging as ones to watch.
Meanwhile Aberdeen-based Brewdog has become a significant player in the sector, opening its own pubs, and building a UK-wide and international following.
In the UK, despite an overall decline in beer consumption, the craft brewing sector has enjoyed compound growth of 12% over the last five years and is now at a similar level to that in the US. There has also been a revival of real or cask ale as consumers have strived for variety, provenance and quality.
This sector growth offers a great opportunity for the Scottish economy, where craft brewers benefit from the high levels of industry knowledge and expertise available north of the border.
Scottish & Newcastle, previously headquartered in Edinburgh, may have been acquired jointly by Heineken and Carlsberg in 2008, but many of the talented and experienced people who helped grow that organisation are still in Edinburgh and keen to invest their time and money backing appropriate new ventures.
While increasing numbers of breweries are seeking assistance on bank funding and investment to help them grow their businesses, one of the key themes emerging is the need for greater collaboration to help them succeed.

The formation of buying groups can help by enabling lower costs.

Most craft brewers do not have the critical mass to take on the industry giants but by working together they can achieve more. Better collaboration across distribution and sales operations is a key aspect to overcoming the challenges which many within the sector are faced with.
Firstly, distribution is a significant cost for all brewers, including the increasing logistical struggle of returning casks from various destinations across the UK. Each year the industry loses many millions of pounds through the theft and misappropriation of kegs and casks.
The formation of buying groups can help by enabling lower costs on key overheads such as raw materials and utilities.
While many brewers which have long established supplier relationships tend to be less enthusiastic about this, by working together in this area, craft brewers have real scope to increase UK and overseas sales. 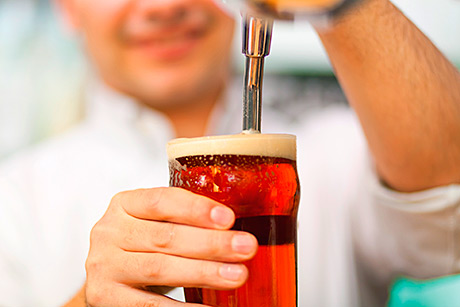 Great examples of effective collaboration are beginning to emerge.
Following a recent event hosted through our firm, up to ten microbreweries now plan to attend the next Craft Beer Rising event in London under a Scottish banner. There they will have access to over 700 UK buyers, including small, independent on-trade operators, national pub and bar chains, off-licences, UK multiples and a number of licensed cafe and deli owners.
Meanwhile an informal alliance of Scottish craft brewers has been formed, which is a positive development with the potential to help move the sector forward.
What’s needed now are public resources to give this group a stronger voice, with coordination and leadership coming from industry body Scotland Food and Drink.
The Scottish Government has referred to the independent brewery sector as a ‘rising star’ within the wider food and drink industry with significant expansion opportunities.
Further government support through extra resources and creative funding for growth initiatives could now really help Scottish craft beer become one of the next major economic success stories.
• Adam Hardie is head of food and drink at Johnston Carmichael.