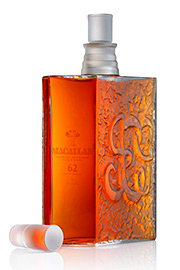 THE firm behind Speyside single malt The Macallan has released the penultimate whisky in its Lalique Six Pillars Collection – a partnership between the distillery and French crystal house Lalique.

The fifth in the series, The Spiritual Home is a 62 year old Macallan. A limited run of 400 decanters has been produced, with an RRP of £16,000.
David Cox of The Macallan said the collection has attracted interest from connoisseurs and collectors since its inception in 2005.