HIGHLAND single malt Scotch whisky distillery Tomatin is said to have cut carbon emissions by more than 80% following the installation of a biomass boiler.

The team at the distillery, near Inverness, claim Tomatin is the first Scottish distillery to install the renewable energy boiler, which produces heat and steam for the production process.
The biomass boiler was installed as part of an Energy Supply Contract (ESCO), which was part-financed by the UK Green Investment Bank, through its fund manager Equitix, and wood pellet manufacturer Balcas, which has a site at Invergordon, 35 miles north of Tomatin distillery.

The new system is credited with improving the distillery’s energy efficiency.

The new system is credited with improving the distillery’s energy efficiency, and is said to have cut carbon emissions by 80% – equivalent to more than 4000 tonnes of CO2 each year.
The biomass boiler was officially unveiled last month, when local MP Danny Alexander visited the distillery to learn about the environmental and economic benefits of the system from Tomatin chief executive Robert Anderson, Balcas MD Ernest Kidney and Lord Smith of Kelvin, chairman of the Green Investment Bank.
Robert Anderson said the reduction in carbon emissions means Tomatin is the first distillery in Scotland to achieve the Scotch Whisky Association’s environmental target for 2050 – 37 years ahead of schedule. 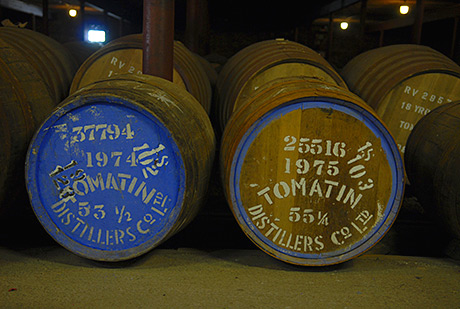 “We are delighted to welcome Danny Alexander and Lord Smith to Tomatin so that they can see for themselves how we as a company have embraced renewable energy and in doing so have achieved our 2050 carbon reduction targets from the Scotch Whisky Association,” he said.
“In addition to reducing our carbon emissions, the energy solution from Balcas has had many additional benefits to us, including clear financial savings, the ability to benefit from the Renewable Heat Incentive for the next 20 years, and a local and secure fuel supply.”
Danny Alexander, MP for Inverness, Nairn, Badenoch & Strathspey, said: “Both the distillery and Balcas are to be congratulated for their forward thinking and positivity.
“The north of Scotland has huge potential for growth in renewables and green energy. I’m confident that this project will be the first of many to benefit the local economy and boost jobs in the area.”