WHEN it comes to opening themed bars or restaurants, Glasgow operator Carlo Citti doesn’t do things by halves.

His American frat house-themed venue Campus, which has been a fixture on Sauchiehall Street since 2005, features an array of memorabilia, including US street signs, licence plates and even its own bus – all sourced and imported by Carlo.
And he adopted a similar strategy with new Mexican cantina and tequilaria Juan Chihuahua on Sauchiehall Street.
It was a concept he’d had in mind for some time.
So when his O’Couture bar and club venue, also on Sauchiehall Street, was in line for a revamp, Carlo reckoned it was the perfect space for his Mexican restaurant concept.
He again joined forces with Donald MacLeod and Brian Fulton of CPL, with whom he launched Campus and Garage venues in Aberdeen last year, to bring Juan Chihuahua to life.

The refurbishment was the easy bit. Sourcing the hand-blown glass and lava stone plates was more difficult.

As Carlo told SLTN, it’s a partnership that works.
“I prefer to do the creative and build and leave the operational side to Donald and CPL so it works well as a joint venture,” he said.
“I’d had the idea for a Mexican for a few years. I love Mexican food and I thought Glasgow needed another Mexican restaurant.
“I had the plan in my head, right down to the hand-painted terracotta plates. I wanted it to be as authentic as possible; there’s no point in doing half measures.
“Donald really liked the idea. He wanted a Zombie cocktail on the drinks list and his wife’s salsa recipe on the menu. Apart from that, he let me get on with it.”
The four-week refurbishment, most of which Carlo did himself, took in the ground floor and basement levels (the upper floors remain as O’Couture club and function spaces) and was largely cosmetic.
The bar was moved from the very back of the ground floor area to the front, and additional booth seating, upholstered in bright red fabric, installed in its place.

Exposed stone walls contrast with a bright colour scheme of orange, red and yellow, while the wall opposite the bar features a black and white montage of scenes from Westerns. Sombreros and cactus plants also feature throughout.
In the basement space, which will operate as a late night diner called The Late Juan from December 6, the theme has been continued, alongside murals of Mexican beers Sol and Corona.
Although Carlo did much of the refurbishment work himself, he said revamping the ground floor and basement levels was the “easy part”.
More challenging, was sourcing authentic crockery and glassware in which to serve Juan Chihuahua’s extensive Mexican food and drink offer.
Lava stone bowls for the guacamole and hand-blown glasses made from recycled Coca-Cola bottles were shipped over from Mexico, while hand-painted terracotta plates and clay wine cups and jugs were sourced in Spain.
And it’s not just the fixtures and fittings that have a distinct Mexican flavour.
Working with supplier Inverarity Morton, Carlo compiled a range of 50 tequilas featuring brands like Aqua Riva, Cazadores, Don Julio, Gran Centenario, Jose Cuervo, Patron, Sauza and Tapatio, and spanning different styles, such as Blanco (unaged), Reposado (aged for between two months and one year) and Anejo (aged for between one and three years).

I had the plan in my head right down to the terracotta plates. There’s no point in doing half measures. 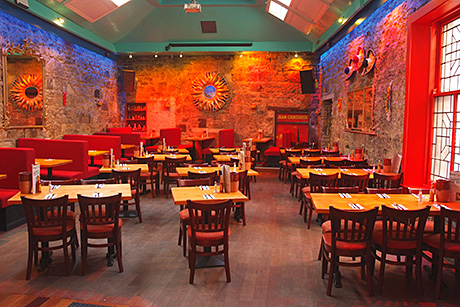 Beyond tequila, Juan Chihuahua stocks a range of Mexican beers, including Sol, Modelo Especial and Corona, as well as Heineken’s tequila-flavoured lager Desperados.
The food also has a distinct Mexican flavour, with dishes including Burritos, Tacos, Fajitas, Quesadillas and Enchiladas.
The menu, designed in the form of newspaper El Diario de Juan (The Daily Juan), also features the ‘back-story’ to Juan Chihuahua.
As Carlo explained, what began as a name inspired by the breed of dog and largest state in Mexico, quickly evolved into a character in its own right.
And it’s a brand he reckons could travel to other cities.
“The name developed and we created the Juan Chihuahua character, and I think it really works,” said Carlo.
“The feedback has been really positive so far, and it will evolve – the menu, the range of tequilas, the entertainment.
“The Late Juan will be another extension of this building. Donald’s got the Garage, I’ve got Campus so we know the market.
“And I think the brand could move; seeing as we know all the suppliers now it should be quite easy to replicate.
“We’ll let this one bed in and then I’ll sit down with Donald and look at where we can take it.”