The Potting Shed goes all the way with its allotment style

A MAN named Angus and the fruits of his labour were the inspiration behind Edinburgh pub The Potting Shed, or so the story goes.

The latest venture from father and son partnership Ian and Craig Minto, The Potting Shed opened its doors on August 1 following a complete refurbishment which extended beyond the interior to create a bar with its own mythology.
Angus and his allotment, along with Billy the Fisherman, Farmer Campbell, and a host of other characters, form the back-story of The Potting Shed. The characters find their way on to food, beer and wine menus, and it’s their story that underpins The Potting Shed’s theme.

The other venues are pretty serious. This was something we could do and have fun with.

Craig said the Potterrow premises gave his father and him the opportunity to try something different.
“We’d seen the venue a couple of years ago and we thought it was a great shape to do an idea we had in mind,” he told SLTN.
“When it came on the market we jumped at it.”
The addition of The Potting Shed brings Ian and Craig’s estate up to five pubs, including Edinburgh gastro-pub The Sun Inn and three venues in Yorkshire.
The pair, who have been working together in the trade for 15 years, share duties between them, with Ian based in Edinburgh and Craig watching over the three pubs in Yorkshire.
Of the five, The Potting Shed stands out as something different, according to Craig.
“Basically the other venues are pretty serious,” he said.
“It was something we could do and have a bit of fun with. Something we can experiment with,”
Experimentation was the name of the game when it came to fitting out The Potting Shed.
The design work was done in-house, said Craig, but rather than working to a fixed plan the interior stemmed from an overall vision with plenty of room for changes along the way.
Each day’s work was the result of dialogue between Craig and local tradesmen as they fitted out the premises using a hodgepodge of collected materials, transforming the unit into an allotment-themed bar over a five-week period.
The allotment theme is evident throughout. 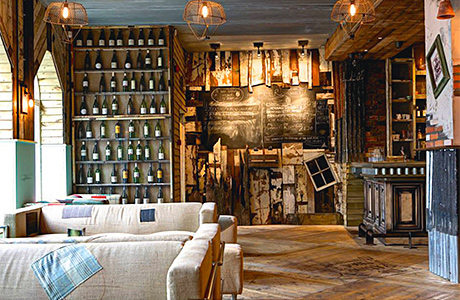 Reclaimed timber sourced from Yorkshire stockist Machells is the material of choice, with the occasional patch of exposed brickwork.
Being rough around the edges was very much part of the plan, according to Craig.
“All of it is salvaged materials, I ran about like a mad man for a month,” he said.
This included attending auctions in and around Edinburgh and hunting in second hand and antique shops to source allotment-themed materials.
As a result of his trawl, the walls of The Potting Shed are lined with chisels, hammers, saws, and spanners; bottles of wine shelved behind chicken wire; and an assortment of plant pots hanging overhead as lampshades.
And the allotment theme goes beyond the décor, extending to the crockery, which includes plant pots of rice, buckets of soup and mini-crates of onion rings.
Even the staff have been dressed in gardener’s garb, with bunnets and braces abound.
“That’s their uniform; they love the theme and the atmosphere of it all,” said Craig.
With their first Festival season under their belts, Craig said the business has developed in a different direction than the student-friendly location had led them to expect.
“We thought initially that it would be a lot more drink-led because of where it is but we’re finding it’s starting to go towards the food now,” he said.
However, catering to diners shouldn’t be an issue for the Mintos, whose gastro-pub credentials include receiving two AA rosettes this year for Yorkshire pub The Craven Heifer.
In keeping with the theme, The Potting Shed joins Edinburgh sister venue The Sun Inn in sourcing local produce wherever possible, although at The Potting Shed all ingredients on the menu are credited to Angus’s allotment and his farmer friends.
Now, as the pub prepares for its first Christmas, Craig wants to push the theme further.
Finding a solution that will allow the venue to host live music is next on his list and if he’s successful, he’s going to try and include staff in the entertainment.
“The idea will be to have impromptu performances from the staff whenever they can,” added Craig.