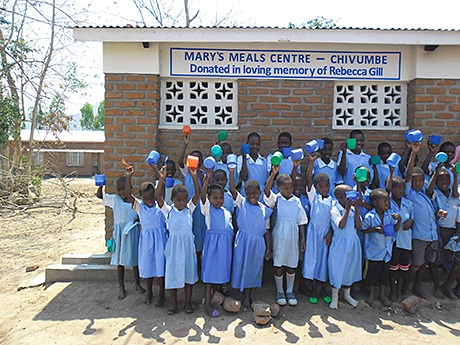 A SCOTTISH restaurateur has made a £7000 donation to Mary’s Meals, helping the food charity to feed schoolchildren in Malawi.

Cook Gill, co-founder of Cook & Indi’s World Buffet, donated the money to the charity’s Sponsor a School project, in memory of his daughter Rebecca.
Gill’s donation will be used to pay for the cost of building and equipping a shelter used to feed children at Chivumbe School in the Blantyre district of southern Malawi.
Gill said the donation will help the charity offer more children a “life-changing nutritional daily meal in their schools”.
“School feeding occurs in different areas in Malawi, with the biggest concentration of participating schools in the south,” he said.
“Mary’s Meals is a well-known entity in Malawi so when news gets out about feeding at a new school, enrolment numbers in schools increase dramatically. Not only that, but attainment figures improve across the board with teachers reporting significant improvement in concentration in lessons.”
Daniel Adams, head of fundraising at Mary’s Meals, said: “We are extremely grateful to Cook for helping us to reach more children with Mary’s Meals through our Sponsor A School project.”