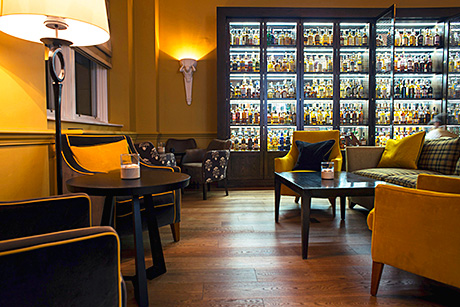 AN enquiry from a hotel guest last July proved to be the catalyst for Scotch – the new whisky bar at The Balmoral in Edinburgh.

A Japanese customer asked executive assistant manager Alexander Feij where he could drink and learn about rare whiskies and, although there’s no shortage of Scotch and knowledgeable staff across the hotel’s two bars, Feij said it highlighted a demand for a dedicated whisky bar.
Earmarking a space known as the Drawing Room, just off the lobby, plans were drawn up for the whisky bar, which the team at The Balmoral, part of the Rocco Forte Hotels group, were keen to have open in time for this year’s Festival.
As Feij told SLTN last week, the sheer size of the whisky range influenced the layout and design of Scotch.
Working with Elgin-based supplier Gordon & MacPhail, the team at The Balmoral selected some 400 whiskies from across Scotland’s whisky-producing regions and spanning a variety of blends, malts and vintages dating back to 1940.
“When it comes to whisky, the key is to work with people who have the knowledge,” Feij told SLTN.
“Gordon & MacPhail is one of the oldest and most experienced suppliers so we worked with them to develop the whisky range.
“We didn’t just pick a number. We reached that number by making sure we had a full range from every region and included lots of smaller distilleries.”
With such a vast number of bottles to accommodate, the range did indeed influence the design of Scotch.
In fact, it takes centre stage in a hand-crafted oak-panelled whisky cabinet with mesh-style doors, rather than glass, which Feij said gives people the impression they can reach out and touch the bottles.

The bar is decorated in whisky-coloured tones to create a warm and intimate atmosphere.

The cabinet forms the centrepiece of Scotch, which was designed by Olga Polizzi, Sir Rocco Forte’s sister, and fitted out by Dundee-based Bentleys.
Decorated in whisky-coloured tones and natural fabrics such as wool, cord and leather, the space features a brushed brass and black granite bar with back-lit artwork by Hubertus Hohenlohe, armchairs upholstered in gold and chocolate velvet and neutral tweed sofas.
Whisky-coloured tones also feature in the contemporary kilts worn by Scotch’s three whisky ambassadors, who previously worked in other bar and restaurant areas at The Balmoral.
The ambassadors received in-depth whisky training from supplier Gordon & MacPhail, as well as brands such as Glenmorangie, and Feij said their knowledge means they are able to help guests navigate the 400 whiskies, which range from £4 to £85 a dram.

It’s all about the service. With whisky you have to take the customer on a journey.

Scotch’s whisky ambassadors can also advise guests on the bar’s selection of Uisge Source waters from the three main whisky regions of Scotland – Speyside, Islay and the Highlands.
Feij said well-trained staff are key to the success of the bar, which opened on August 9 following the two-week revamp.
“It’s all about the service,” he said.
“Yes, you can have a cabinet with lots of whisky in it but it’s all about taking the customer on a journey.”