Food pairing proving ever popular, according to brewer 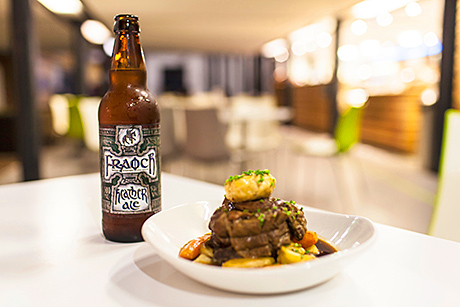 A SCOTTISH craft brewer is planning a series of food matching events after the success of a recent beer and food night in Glasgow.

Williams Brothers hosted the event at Glasgow’s Tramway Cafe and Bar, with guests charged £45 per head for a six-course tasting menu which combined traditional Scottish food with Williams Brothers beers.
Chris Williams, who organised the dinner with Tramway manager Cassandra McIntyre, said the success of the event will prompt further food pairing evenings.
“People are enjoying beer more now than ever before,” said Williams, who went on to highlight the versatility of craft beer for menu pairings compared with more traditional tasting events.
“Beer is very diverse, it can be more interesting [than wine] in some ways.
“It pairs well with food.”
Dishes at the Tramway event included Cullen Skink paired with the “zesty and earthy” Harvest Sun, a 2.8% ABV golden ale; braised beef cooked in Williams Brothers heather ale Fraoch; and chocolate porter brownies with Williams Profanity Stout.
The final beer of the evening, the Fraoch 22, was served with a Scottish cheese board.
A special edition version of the heather ale that was released for the brewery’s 22nd anniversary last year, the 11% ABV Fraoch 22 was aged for six months in ex-sherry casks previously used to mature Auchentoshan single malt.
The maturation of Fraoch 22 involved a collaboration between Williams Brothers and Morrison Bowmore, which is expected to see annual releases of cask-aged beers.

Next year’s release, the Alba 23, will be matured in casks formerly used in the maturation of Bowmore single malt.
Following the Fraoch 22, the evening came to a close with a sixth course consisting of coffee and Highland single malt AnCnoc 12 year old.
Williams praised both the venue and its staff for the success of the event.
“We have a long standing relationship with the venue and it has been great working with Cassandra and the team,” he said.
“The staff were helpful and its a brilliant space, they put a lot of effort into the upstairs dining area. It was very well received and everyone enjoyed it.”
The brewery claims to take inspiration from local and seasonal ingredients for its beers, mirroring current catering trends.
“We find ourselves doing more and more of this style of tasting evening and not just here in the UK,” said Williams.
“While this menu focuses on the best of regional sourcing and highlights traditional Scottish cooking you can just as easily find us pairing beers at a ‘Grill Off’ in the US or relating our harvested ingredients to those collected by the foraging chefs of NOMA in Copenhagen.”