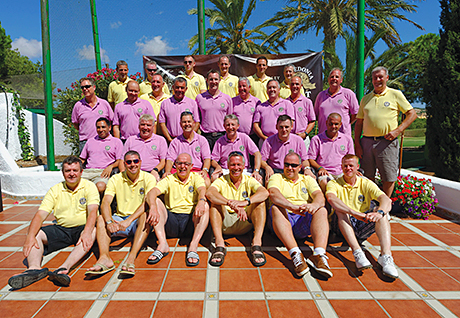 A GROUP of west coast publicans celebrated in the sun last month after winning the inaugural Caledonia Best Golf Challenge in Spain.

The team of licensees faced their east coast rivals in the final of a summer-long tournament held for Caledonian Best’s trade customers.
Held at the La Manga resort on the south west Spanish coast, the competition pitted the two 12-strong teams against each other in the same match play format that is used during the Ryder Cup.
The 24 competitors qualified for the trip to Spain from a field of 126 Scottish on-trade golfers, who participated in qualifying rounds held at Archerfield in East Lothian and Dundonald in Troon.
John Gilligan of Tennent Caledonian, the firm behind Caledonia Best, praised the support the brand has received from the on-trade since it was launched in 2011.
Gilligan said the tournament was a way to “thank them and have some fun along the way”.
The competition forms part of Caledonia Best’s partnership with Scottish golf, which is led by the brand’s “clubhouse captain”, Scottish golfer Sam Torrance.