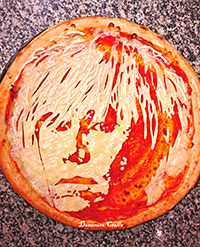 A GLASGOW chef has created a pizza portrait of Andy Warhol to mark an upcoming exhibition of the US artist’s work at the Scottish Parliament.

Domenico Crolla, who owns Bella Napoli in Shawlands, unveiled his latest pizza art ahead of the Warhol exhibition at Holyrood from October 5 to November 3. Warhol is the latest pizza portrait by Crolla, who has created pizzas depicting The Pope, footballer Cristiano Ronaldo and singer Rihanna.
And he said it was the US artist who first inspired his pizza art.
“It was Warhol’s striking monochrome printing technique that was the initial inspiration for my celebrity pizza portraits so it makes sense that Warhol himself should feature on one of my pizzas,” said Crolla.