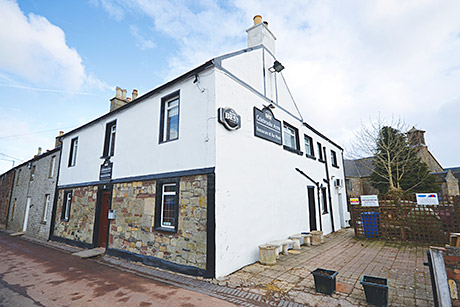 AN established village pub in South Lanarkshire which is said to enjoy strong wet and food sales has come onto the market.

The Colebrooke Arms in Crawfordjohn, near Abington, comprises a traditional bar with separate dining room, which is serviced by a recently-refurbished kitchen.
The property also has a beer garden overlooking the South Lanarkshire countryside and a three-bedroom owner’s flat.
Gordon Mair, director of selling agent Cornerstone, said: “I have known the Colebrooke Arms for many years and indeed sold it to the current owner.
“The inn derives trade from local custom as well as tourists and is easily managed by a couple with occasional part-time staff.
This is a great opportunity for anyone who wants a pub at the heart of the community.
“Income is derived almost equally between food and wet sales and although trading successfully still has other potential to be realised by new owners as the business currently trades on a five day per week basis, closing on a Monday and Tuesday throughout the year.
“There is also other potential, such as offering a bar service to functions in the village hall and perhaps converting part of the large owner’s flat into bed and breakfast accommodation.
“This is an ideal opportunity for those wishing to work within the licensed trade in a lifestyle inn where you are very much part of the local community in premises that ooze character throughout.”
The Colebrooke Arms is being marketed by Cornerstone with a guide price of £185,000.

Image – The Colebrooke Arms has a bar and dining area.