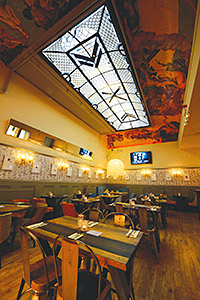 HAVING refurbished a number of new and established properties, it’s been a busy year for Maclay Inns.

An ongoing programme of investment at the firm has led to several major design projects across its estate, and it seems there is no end in sight.
In February, the company unveiled Munro’s, a new craft beer pub in the west end of Glasgow. This was followed, in April, by the completion of a £700,000 refurbishment of Balloch property the Tullie Inn.
In May it was announced the company had purchased Glasgow city centre pub the Grahamston, and earlier this month that property was reborn as The Hope after a major, two month refurbishment.
And The Hope’s rebirth has coincided with the reopening of another Maclay venue, The West Port Hotel in Linlithgow, after its own refurbishment (see page 22).
Maclay managing director Steve Mallon said the two projects are a good illustration of the two different strands of the company’s strategy: to develop the existing estate with new designs, food and drink offers, while building the portfolio with acquisitions.
Mallon said that the firm’s management team has been encouraged by the success of the Tullie Inn refurb, and he is hopeful that the West Port project “is going to follow in those footsteps”.
Located on Waterloo Street, The Hope, meanwhile, represents the culmination of a long-term plan to expand into Glasgow city centre.
“We’ve been looking for the right thing for a while, particularly a freehold property,” said Mallon.
“There’s not many of them [freeholds] in the city centre – most of them are leases.
“And, secondly, we wanted one that was ripe for redevelopment.
“The Hope ticked both of those boxes and being on such a high footfall street, just a few yards from Central Station, was the cherry on the cake that made us think this one would be worth the effort.”
The investment programme was kicked into high gear last year, after Maclay entered into a partnership with Tennent Caledonian.
As well as becoming the main beer supplier for Maclay’s venues, the deal also saw the brewer provide funding for Maclay acquisitions.
Mallon said the alliance has been “very significant” in the company’s continued expansion.
“It’s a strong partnership,” he said. “We needed not just the design and property opportunities, we needed access to funding and the range of products, such as Tennent’s Lager and Heverlee, to give the customers a great proposition.
“It’s all come together quite nicely at the right time.”
Meanwhile, the company has continued to expand its portfolio with the acquisition of Prestwick pub Flanagans.
The property, which was purchased by Maclay earlier this month, will be refurbished within the next six months.
Mallon declined to comment on how much Maclay had paid for the Flanagans freehold, but stated the company is preparing to spend around £500,000 on the refurbishment.

Image – The Hope in Glasgow is the latest venue to be acquired and fully refurbished by Maclay Inns.