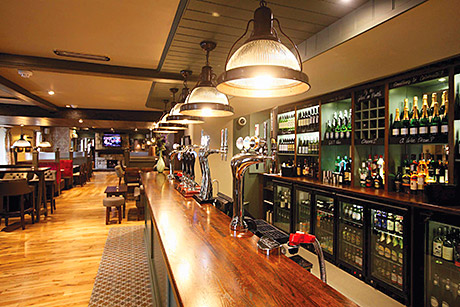 GOING ‘back to basics’ is very much the theme of the new-look West Port Hotel in Linlithgow.

The venue, which has been part of the Maclay Inns group since 1997, recently benefited from a two-month, £450,000 refurbishment which involved the complete transformation of the venue’s interior to create an entirely new look and feel.
Nowhere is this more evident than in the hotel’s bar and restaurant areas.
During the project, which saw Maclay work with design firm IBDP and contractor Hugh Stirling, the bar itself was demolished and re-built in a different area, and a dividing wall was knocked down to create a new restaurant space. New booths have been installed opposite the bar, while the restaurant area has been designed to cater for both couples and larger family gatherings.
The new interior is described as having a ‘modern country inn’ look and majors in warm greys and greens, with flashes of colour provided by the soft furnishings.
The theme has been continued through the hotel’s nine en suite letting rooms, which have also been revamped in keeping with decor in the bar restaurant areas.
Further work was carried out in the West Port Hotel’s function room.
The space, which can cater for up to 120 guests and has its own entrance, bar and stage area, is being positioned as a venue for a range of occasions, including private functions, events, celebrations and meetings.
Darryl Pitts, the hotel’s new general manager, said the refurbishment has already proved popular with customers.
“After months of hard work from the full team, we are delighted to throw open the doors of the new West Port Hotel and welcome our customers back,” said Pitts.

We’re confident that our regulars will love the new look as much as we do.

“The feedback we’ve had from people who’ve popped in for a nosey so far has been very positive and we’re confident that our regulars will love the new look as much as we do.”
The changes to the venue haven’t all been physical, however.
The menu at the hotel has also been spruced up, introducing dishes such as slow-cooked pulled pork with BBQ sauce and teriyaki chicken breast with wilted greens and fresh coriander rice, as well as sharing platters such as the mixed seafood platter with crayfish, smoked salmon, mussels and hot smoked mackerel.
On drinks, Maclay said the range is designed to appeal to as broad a customer base as possible, and features a number of craft beers, ales and ciders as well as a selection of wines and spirits.

Image – The West Port Hotel has been designed to be warm and welcoming to established and new customers.