“IF our butcher has a sack of bulls’ testicles there are only a handful of his customers that will do something with them,” Stravaigin bar manager Steve Auld told SLTN last week.

The Glasgow bar and restaurant counts itself as one of them – and it’s this kind of approach which helped Stravaigin clinch SLTN’s Inspiration Award for 2012, in association with Carlsberg.
A willingness to take risks was a prerequisite for the award, but the Gibson Street eatery has been pushing boundaries since it opened in 1994.
Colin Clydesdale and Carol Wright founded Stravaigin after gaining experience at Ubiquitous Chip – the Ashton Lane institution opened by Colin’s father Ronnie in 1971.
The pair wanted Stravaigin, an old Scots word which means roaming or wandering about, to offer global cuisine made using local produce – coupled with some more unusual ingredients.
And it’s a founding principle which remains in place today.
Alongside scallops from Islay, pigeon from Perthshire and Carsphairn venison sits the likes of bulls’ testicles, squirrel and rook meat.
As Auld explained to SLTN last week, the menu is not designed to shock.

Everyone now does farm-to-plate food; we’ve been doing it since we opened.

“We’re never quirky for the sake of it,” he said.
“We want our customers to try things they wouldn’t normally try. Everyone now does farm-to-plate food; we’ve been doing it since we opened.
“He [Colin] loves when someone walks in here very unassuming and walks away enthused.”
Stravaigin’s operations manager Fiona Ashford said local produce remains at the heart of the restaurant.
“Think global, eat local is our motto,” she said. “We try and have lots of exciting food from around the world.”
Pushing boundaries is all very well but surely it must present challenges when it comes to staff training?
It seems management at Stravaigin have their own tactics to keep staff on the ball.
“When we change the menu there’s a tasting, they’re given comprehensive cheat sheets and then a few weeks later they’re given a test,” said Auld.
This emphasis on product knowledge helped Stravaigin scoop a further two SLTN Awards last year.
On top of the Inspiration Award, Stravaigin won both the Best Restaurant – under £35 category, sponsored by Bunnahabhain, and the SLTN Wine Award, in association with Forth Wines.
Judges were impressed by Stravaigin’s expansive wine range and the way in which wine was made accessible to customers through, for example, wine flights.
The ‘global thinking’ philosophy behind Stravaigin’s food offer is also evident on the wine list, which includes a Lebanese Cabernet Sauvignon and a Pinot Noir from Romania.
Auld highlighted the Romanian Calusari Estate as an example of an accessible wine, which he said allows Stravaigin to offer a quality Pinot Noir by the glass at a more affordable price than an old world wine.
Stravaigin was also commended by last year’s SLTN Awards judges for the range of events it hosts.
One year on and the mix of wine flights, cultural evenings and the culinary globe trot that is Stravaigin’s ‘Meander’ are still going strong.

A monthly event, the Meander is designed to take diners on a culinary ‘wander’ to food destinations including Japan, Indonesia and Brazil.
And Stravaigin’s events aren’t restricted to the confines of the restaurant.
The team took part in a recent street food festival at Glasgow’s Barrowlands market, where staff served Indian kati rolls and Mexican pozole rojo.
Ashford said participating in events such as these gives restaurateurs the opportunity to “put your name out there”.
There are no signs of things slowing down at Stravaigin, either, with the introduction of a new wine offer currently underway.
“We’re doing wines from a bag and box,” said Auld.
“It’s much more efficient, cuts waste and cuts carbon footprint. It’s a quality wine in different packaging.” 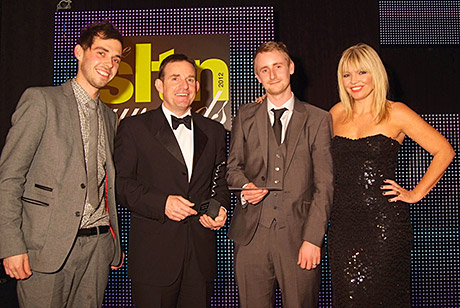 Images – Stravaigin was extended as part of a refurbishment in 2010.