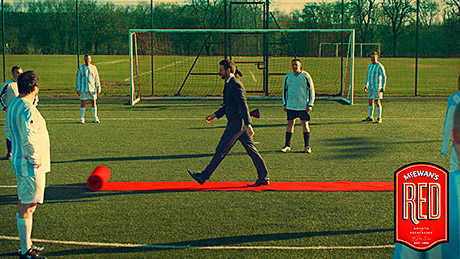 BREWER Wells & Young’s saw Red this summer as it ramped up activity for its newest ale.

McEwan’s Red was the focus of a major summer marketing campaign, which culminated with sampling activity in bars in Dundee, Edinburgh and Glasgow last month.
The sampling team visited 14 outlets in the three cities on Thursdays, Fridays and Saturdays throughout August as well as attending last month’s Foodies Festival in Edinburgh.

The beer has all the heritage associated with the brand but brings something different to the bar.

McEwan’s “Redhead ambassadors” hosted the sampling events, where they spoke with consumers, demonstrated the two-part pour and distributed half pint samples of 3.6% ABV McEwan’s Red, which was launched in April.
The sampling activity ran alongside print and TV ads, which show people journeying along a red carpet towards a pint of McEwan’s Red.
Phil Toms, director of brands at Wells & Young’s, said the brewer is “really pleased with how McEwan’s Red has taken off in Scotland”.
“The beer has all the heritage and history associated with the McEwan’s brand but brings something completely different to the bar,” he said.
“Consumers have been keen to try it, they like it, and, most importantly, are adding it to their regular drinking repertoire.”
Brewed to be red in colour, McEwan’s Red is described as a “smooth, refreshing and easy to drink ale”.
“Since its launch we have seen orders coming in from across the hospitality spectrum, from traditional wet-led pubs, gastro pubs, contemporary high street bars and now hotels across Scotland,” added Toms.
“We are now looking to keep up the momentum with our month-long sampling campaign to introduce new consumers to the beer as well as creating a sense of theatre in-outlet to drive people to the bar.”