Broadford Hotel one of three Isle of Skye outlets for sale 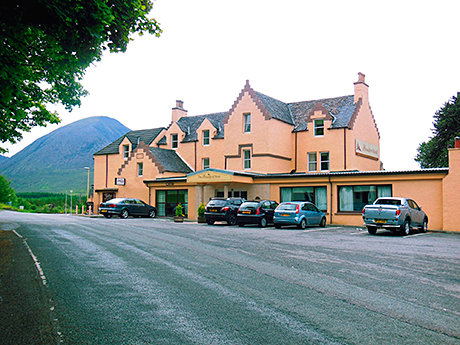 A HOTEL that’s said to be the birthplace of whisky-based liqueur Drambuie is on the market.

The Broadford Hotel, in the village of Broadford on the Isle of Skye, dates from the 17th century; the Ross family, who owned the hotel in the late 1800s, are said to have been passed the recipe for Drambuie, which they subsequently produced for their guests.
The hotel comprises 11 letting bedrooms, a bistro/restaurant, dining room and two bars. There are also plans for a 17-bedroom and leisure facility extension.
Selling agent Colliers International is marketing the Broadford Hotel with a price tag of offers around £550,000.
It’s one of three hotels on the Isle of Skye currently on the books of the agent.
Colliers is also seeking buyers for Portree hotels Marmalade at Portree House, on the market at offers around £400,000, and the Bosville Hotel, which has a price tag of offers around £800,000.
A Georgian former laird’s house, Marmalade at Portree House is set in its own private gardens overlooking Portree.
The hotel has eight letting bedrooms, a restaurant and lounge bar; there are plans to extend the property, creating an additional 18 rooms.
The Bosville Hotel, meanwhile, is a 19 letting bedroom property located in the town of Portree itself; it comprises a lounge bar, two restaurants and a separate cottage, which is said to offer “spectacular views” of Portree bay and harbour.
Alistair Letham at Colliers International said the hotels “are in good condition throughout and have good levels of established custom”.
“The availability of these three hotels on the Isle of Skye offers a wonderful opportunity for anyone seeking well established businesses with good levels of turnover and the joy of island life in north west Scotland,” he said.
Colliers International recently sold a fourth Isle of Skye hotel, Flodigarry House Hotel, from an asking price of £1.9 million.
The business was bought by Paul and Bette Temming from the Netherlands, who previously owned and operated a hotel and restaurant in the Amsterdam area.

Image – The Broadford Hotel on the Isle of Skye is said to be the birthplace of Drambuie.