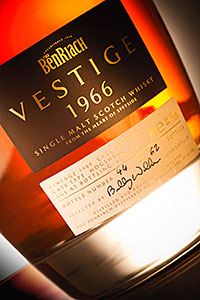 THE BenRiach Distillery Company has released the oldest whiskies from its two distilleries.