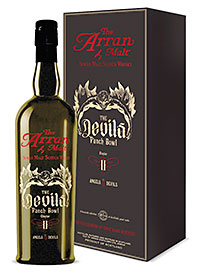 THE second whisky in Isle of Arran Distillers’ “trinity of ungodly spirits” has been released.

The Devil’s Punch Bowl Chapter II, Angels & Devils is made using 27 different Arran casks.
Angels & Devils is said to be based around sherry hogsheads and includes peated Arran barrels from 2004.
Only 6660 bottles of the 53.1% ABV spirit, which has an RRP of £72.99, have been released worldwide.
Distillery director Euan Mitchell expects interest in the new whisky to be high after the first Devil’s Punch whisky sold out last year.
“Angels & Devils is a spirited single malt whisky which will stand out,” he said. “It will appeal to people who look for quality and something unique – a perfect choice for those who dare to dram with the devil.”