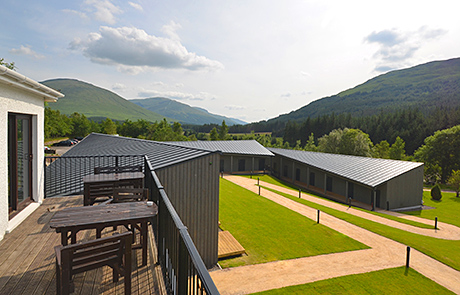 UNTIL recently, tired walkers stopping at the Bridge of Orchy Hotel would spend the night in a bunkhouse before heading on to Rannoch Moor on the way to Fort William.

A popular stop for walkers heading north on the West Highland Way, the hotel, which lies between Crianlarich and Glencoe, is approached via an old military road.
Mucky boots are still welcome at Bridge of Orchy, but the accommodation is very different after being given a complete overhaul.
“A lot of people aren’t expecting it until they get here,” said Andrew McKnight, managing director of McDonald Orr, the firm behind the Bridge of Orchy Hotel.
“We get a really good reaction, it’s a big change.”

Demolishing the bunkhouse and replacing it was the biggest job.

The transformation is the result of an ambitious redevelopment project, which got underway in December last year.
Planned by architecture firm Allies and Morrison and Edinburgh-based Graeme Massie Associates with construction work carried out by Marshall Construction of Alloa, the project involved replacing the old bunkhouse with new accommodation – changes that required the business to close for three weeks last December.
Demolishing the bunkhouse and replacing it with 21 new lodges and a courtyard extension was the biggest job. Additional accommodation was also created in a former staff cottage in the grounds, which was converted into a hotel suite with wheelchair access.
Constructed by Carlisle-based holiday home manufacturer Reiver Lodges, the lodges were built as pods at the Reiver Lodges factory before being transported to the Bridge of Orchy site for installation.
McKnight said the lodges aim to offer hotel standards in standalone units.
Made using eco-friendly panels which offer sound insulation, each has its own shower facilities, hardwood floors, floor to ceiling glass sliding doors and drying areas, which allows the hotel to continue attracting walkers.
McKnight said the sound insulation is on a par with that offered in Europe.
“A lot of the advanced hotels on the Continent are doing it and [owner] Sandy Orr was really taken with the idea,” he said.
Although the redevelopment hasn’t increased the overall sleeping capacity at the Bridge of Orchy Hotel, upgrading the accommodation from a bunkhouse to lodges has tripled the site’s capacity in terms of the number of rooms, McKnight claimed.
“We only had ten bedrooms in the main hotel, which couldn’t keep up with trade in the summer, so we decided to put in more rooms,” he explained. “We’re getting a lot of inquiries for weddings and tour parties now that we have the space.”
Accompanying the construction and refurbishment work on the hotel buildings, there has also been extensive landscaping work in the grounds, which was carried out by Skye architecture firm Dualchas in collaboration with horticulturist Sarah Byrne.
McKnight was keen to use indigenous species so the team consulted with Locket Agri-Environmental of Perth.
“We just wanted to make everything better,” said McKnight.
“We didn’t want to wait around so we added in turfing and did some landscaping.”
The hotel reopened in the new year following the three-week closure in December for construction, and work on site was completed in May.
And McKnight said there’s still more to come.
Phase two of the Bridge of Orchy revamp will include the refurbishment of the main building and is expected to get underway later this year. 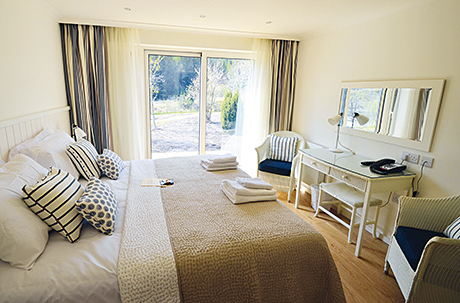 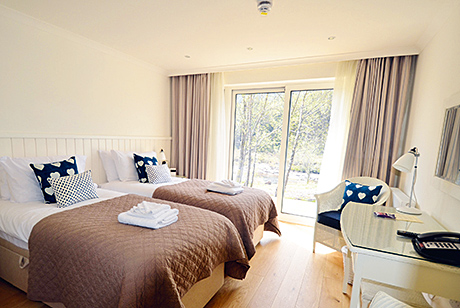