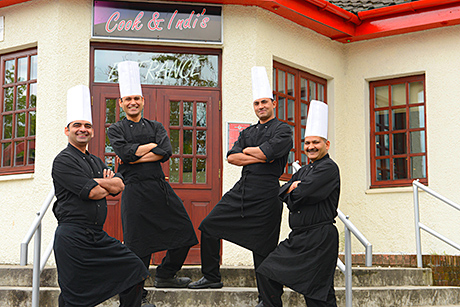 A SCOTTISH restaurant group specialising in global cuisine has opened a new outlet in Bishopbriggs.

The new 300-cover Cook and Indi’s World Buffet – the fourth in the chain – offers a menu spanning five different cuisines (Indian, Japanese, Sushi, Chinese and Italian) with more than 100 dishes on the menu, ranging from pizza and pastas to sushi and curries. The restaurant also offers a carvery and a dedicated kids’ section.
“We’re delighted to serve up our revolutionary world on a plate concept in Bishopbriggs,” said co-founder Cook Gill.
“The idea behind our World Buffet is to bring together various cuisines from different parts of the world so that when families are dining out there’s no need for an argument about which restaurant to go to, because we offer food to suit everyone’s tastes.”

Image – The team behind the new World Buffet outlet in Bishopbriggs.