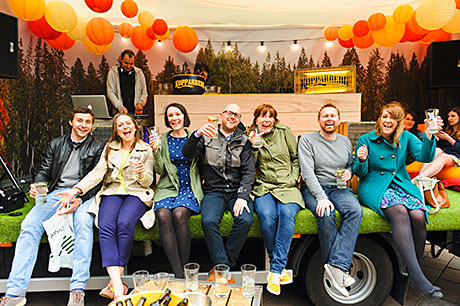 KOPPARBERG rounded off its summer ‘happenings’ campaign in Glasgow earlier this month.

The Swedish cider brand rolled into the city in a branded truck and set up a forest-themed ‘happenings’ party, with Kopparberg cider and a DJ, on Buchanan Street for competition winner Colin Chapman and his friends. The competition had asked consumers to tell Kopparberg why they wanted “something amazing to happen,” through the brand’s twitter account.
The event in Glasgow was the third and final Kopparberg ‘happening’, and followed parties for winners in London and Manchester.
The competition formed part of the campaign to promote Kopparberg’s new Elderflower & Lime and Cloudberry variants.
Rob Calder, head of marketing for Kopparberg, said Scotland is a key market for the brand.
“Glasgow has always had a passionate community of Kopparberg fans, and it’s great to see one of the happenings winners enjoying their own unique experience in the city,” he said.
“Kopparberg is a brand synonymous with getting together with friends in the summer sun, so we thought why not bring the Swedish summer right to Colin’s doorstep?”
The happenings activity drew to a close as Kopparberg unveiled a new outdoor ad campaign to promote its Mixed Fruit and Strawberry & Lime variants.
Tying in with the summer theme, the outdoor advertisements, which will run in Glasgow, London, Manchester and Liverpool, are thermo-activated, meaning the ad will only appear during sunny weather.

Glasgow has always had a passionate community of Kopparberg fans.

The outdoor campaign is scheduled to run throughout August supporting TV, online, social media and point of sale activity.
“Recent analysis proves what we’ve long suspected – for every single degree rise in temperature over the summer, there is a direct increase in the number of people ordering a Kopparberg,” said Calder.
“So to utilise digital technology with advertising that switches on when people are predisposed to a Kopparberg, seems like perfect innovation.”

Image – Glasgow winners celebrate at their ‘happening’ on Buchanan Street with a Kopparberg party.

Make the most of the great outdoors

Customer service is key to success

Major events can roll away the winter blues