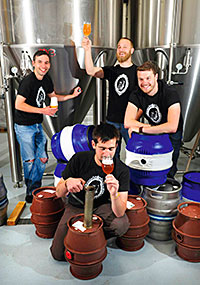 CRAFT beer producers will gather in Glasgow this Saturday (July 27) for the inaugural South Side Beer Festival.

Organised by members of Glasgow CAMRA, Food and Drink Glasgow and local group About Shawlands, the event, in Langside Hall, will feature beers from over a dozen Scottish breweries, including Harviestoun, Fyne Ales, Houston, The Kelburn Brewing Company, Loch Lomond, Brewdog, West and Williams Bros.
Natural Selection Brewing, founded by students of Heriot-Watt University’s International Centre for Brewing and Distilling, will also be at the event to showcase their debut beer ‘Origins’.
Festival organiser Dave Lannigan credited a growing interest in craft beer in Scotland for the high demand for tickets to the event, which he said sold out within four days.
“It seems like more and more people are looking for new and more interesting beers,” said Lannigan.
“People are developing their own varied taste and lots of them are looking to locally produced beers or stuff from smaller, niche brewers – there’s a huge variety of stuff out there and we’re looking to reflect that at the festival.
“There’s such a variety of great beers in Scotland, the UK and around the world, and we just want people to have the chance to try them all.”

Image – Over a dozen brewers are expected to attend.