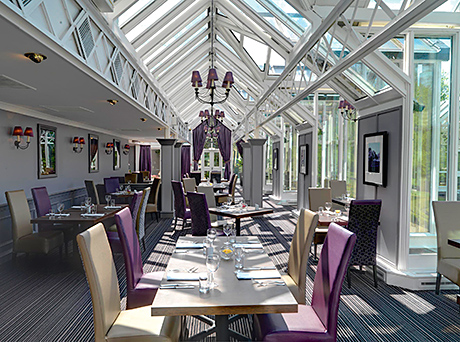 HILTON has opened the third Scottish property under its DoubleTree by Hilton brand in Dundee.

The hotels giant, in partnership with management firm Redefine BDL, launched the new business in the former Landmark Hotel on the city’s Kingsway West following a £1 million revamp.
As part of the refurbishment of the property, which dates from 1870, the 92 bedrooms were upgraded and a new health club with indoor swimming pool was added.
The hotel offers fine dining in its Maze Restaurant, which is located in a glass house overlooking the six-acre gardens, with Italian-style maze and fountain; while the Lounge Bar is said to offer more casual dining and drinks.
DoubleTree by Hilton Dundee, which joins sister properties in Dunblane and Aberdeen and is Hilton’s 14th hotel in Scotland, also offers a range of meeting and event facilities across its 130-capacity purpose-built Landmark Suite Conference Centre and 30-capacity Greystanes Suite, located in what was originally a private family chapel.
Simon Vincent, of Hilton Worldwide, said the new hotel’s proximity to Dundee Airport and the main A90 route offers an “easily accessible location whilst maintaining a unique sense of heritage and nature”.
“Scotland remains one of the most popular destinations for our guests and DoubleTree by Hilton Dundee is a great addition to our 14-strong Scottish portfolio,” he said.
“The hotel was recently named Dundee Hotel of the Year at the 2013 Scottish Hotel Awards and we are delighted to be bringing it under the DoubleTree by Hilton brand at a time when Scotland is gearing up for a huge year of tourism with its hosting of the 2014 Commonwealth Games and Ryder Cup.”
John Greenleaf, head of DoubleTree by Hilton, said the Dundee property retains many original features. “DoubleTree by Hilton Dundee showcases the splendour of the Victorian era and provides a picturesque retreat just four miles from the city centre,” he said.
DoubleTree by Hilton’s fourth Scottish hotel is set to open in Edinburgh later this year.

Image – The Maze Restaurant is located in a glass house overlooking the six-acre gardens, which feature a maze and fountain.