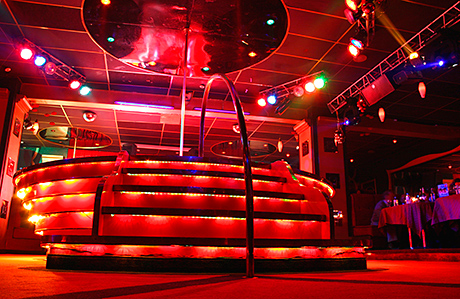 OPERATORS have hit out at the Scottish Government for associating lap dancing clubs with criminal activity.

A consultation on the government’s plans to introduce a separate licensing regime governing adult entertainment venues, such as lap dancing clubs, launched late last month.
As well as keeping performers and customers safe, the consultation document argues that increased regulation “would limit the risk of criminality, such as prostitution and human trafficking”.
But Steven McDonald, who runs lap dancing clubs in Glasgow and Edinburgh and is a spokesman for the Association of Licensed Adult Entertainment Venues Scotland, said the consultation document is “a scandal and a disgrace”.
“The whole document is completely biased,” said McDonald.
“Having horrendous suggestions in the same sentence as lap dancing, suggestions of human trafficking and organised crime, is nothing more than a shock tactic and [the Scottish Government] doing their utmost to scaremonger.
“There is no evidence whatsoever to substantiate these words being in the same sentence as lap dancing.”
Under the new regime clubs would have to apply to their local council for an adult entertainment licence and it would be up to the council to decide how many licences to grant, or whether to grant any at all.
Tony Cochrane, who operates lap dancing clubs in Aberdeen, Dundee and Inverness, said although councils should be able to limit the number of clubs in an area, closing established venues is a step too far.
“If you’ve run well for a number of years you should be left alone,” he said.
“If there’s two clubs in a town they should set the limit at two, because they’ve found that two hasn’t been a problem, but don’t put it to zero.
“To close someone after 15 years of behaving themselves is totally unfair.”
The consultation comes after a number of licensing boards expressed frustration with the current licensing system, which does not allow boards to take anything other than the sale of alcohol into consideration when licensing adult entertainment venues.
The issue has been in the spotlight since 2011, when the Court of Session ruled that Glasgow licensing board had stepped outside of its remit in refusing a premises licence to club operator Brightcrew.
A Scottish Government spokeswoman defended the wording of the consultation document, saying: “Some anecdotal evidence in respect of prostitution and human trafficking has been suggested by stakeholders but the consultation refers to the risk rather than specific evidence of illegal activity which would of course be investigated by police.”
The Scottish Government introduced plans for tougher licensing of sexual entertainment in 2010 but the proposals failed to make it through the Scottish Parliament.