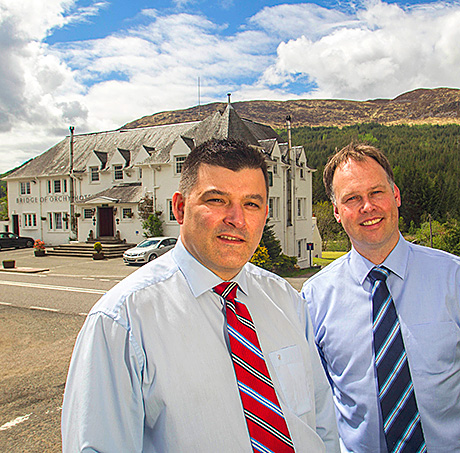 AN Argyll hotel has tripled in size after its operators secured a £1 million funding package from Bank of Scotland.

A major refurbishment of the Bridge of Orchy Hotel near the West Highland Way saw 23 bedrooms added to the hotel’s existing ten rooms. Of the new rooms, 21 are in a courtyard extension which was built on the site of a former bunkhouse, while a further two suites were created in an adjacent building.
The project totalled £1.5m, with Bank of Scotland providing £1m in term loan and overdraft facilities.
Andrew McKnight, managing director of the hotel, which has been owned by Donald MacDonald and Sandy Orr since 1990, said the additional rooms will help meet what he said is growing demand.
“It’s a very relaxed hotel, offering really good food and friendly service,” he said.
“We wanted to make sure the hotel not only maintained its standard of accommodation but actually brought facilities up a notch without changing the feel. It has been a substantial investment and a big job, but we’re really pleased with the finished result.
“The additional rooms mean we’re now able to welcome and accommodate discerning international travellers, which will make a substantial difference to the business.”
Ian Craig, relationship manager at Bank of Scotland, said: “The hotel has a great reputation with strong customer advocacy demonstrated through great Tripadvisor reviews and by frequent return visits. With a greater capacity of high standard accommodation, we’re sure this much-loved hotel will continue to thrive.
“This substantial funding package again underlines Bank of Scotland’s continued support for Scotland’s vital tourist industry.”