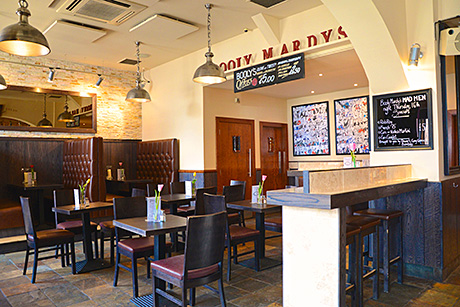 ‘IF it ain’t broke don’t fix it’ was the mantra adopted by Mark Tracey as he tackled the refurbishment of Glasgow cocktail bar Booly Mardy’s.

Last month’s revamp was planned to coincide with the west end venue’s tenth birthday and came a little over a year after Tracey acquired the Vinicombe Street bar from Glasgow operator Alan Tomkins.
But as Tracey told SLTN last week, the purpose of the refurb wasn’t to reposition the outlet.
“It was ten years old and I just thought it was the right time,” he said.

It’s the first thing I’ve developed on my own and I wanted to get it right.

“It needed a freshen up.
“It wasn’t about putting my own stamp on it – if it isn’t broke don’t fix it – but it just needed a bit of a refurbishment to reinvigorate curiosity.”
Although the bar’s layout and overarching theme remained the same, the decor received a significant overhaul.
Designed and implemented by Tracey and his staff, the new-look interior features a burgundy and cream colour scheme, custom-made booths, and paintings by local artists on the walls.
“It’s the first thing I’ve developed on my own and I wanted to get it right,” Tracey explained.
“We essentially picked everything and sourced everything. We stripped it and did it again.
“Before, we didn’t have the booths at the back; the wall was essentially feature wallpaper so we’ve rebuilt it with the natural stone tiling, changed the light fittings and replaced the tables with solid oak instead of veneer. 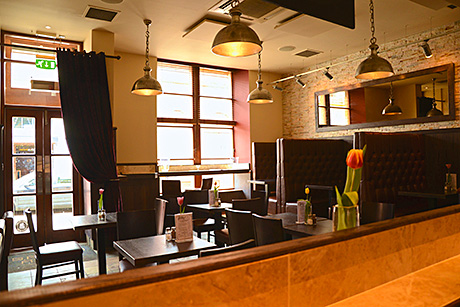 “We changed the colour scheme from stark white to burgundy and cream to be a bit warmer. It’s now light and breezy during the day with a good atmosphere at night.”
In terms of the drinks offer, cocktails and spirits remain the focus at Booly Mardy’s.
There are more than 180 spirits on the gantry and an extensive cocktail menu.
As a result, Tracey said staff training is key; much of it takes place in the bar but staff are also encouraged to learn in their own time.
“We have staff entering cocktail competitions, which is a good way to learn and it’s something we’re looking to do more of,” he said.
“You can feed off the professionalism in competitions and see where to go with standards.”
Beyond drinks, food is considered “essential” to Booly Mardy’s midweek trade.
“The food offering is intrinsic,” added Tracey.
“We offer rustic pub food. It’s all freshly cooked here with things like hand made burgers and pizzas.
“We try to get as much local produce as we can and try and keep everything in season. The menu changes every month and a half or so.”
With the refurbishment complete in time for Booly Mardy’s tenth birthday this month – and the revamped food and drink offer in place – Tracey is focused on promoting the bar to a broader clientele.

It’s ten years old and I just thought it was the right time to freshen it up a bit.

“We’ve been working on our online presence and social media,” he said.
“We all do our bit on Facebook and are about to start a PR calendar with staff members assigned promotional tasks.
“We also launched a brand new website that’s more interactive with an online database of cocktails we’ll be adding to.
“Hopefully we’ll be offering online video masterclasses in cocktails soon.”

IMages – Booly Mardy’s cocktail bar in Glasgow’s west end has been revamped to coincide with the outlet’s tenth birthday.