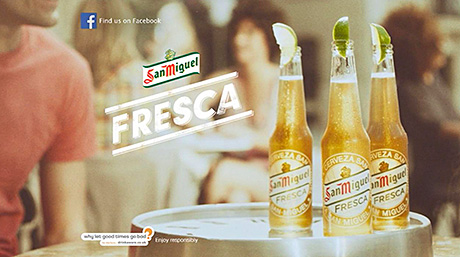 SAN Miguel Fresca has made its TV debut as part of a new marketing campaign for the brand.

The 4.4% ABV beer, which was launched last year and is described as a crisp, refreshing lager designed to be served with a wedge of lime, is the focus of a new TV ad.
Based on the theme of ‘living for the moment’, the ad is set in a bar in a Spanish plaza where time is of no concern. It shows a group of friends enjoying San Miguel Fresca outside while the barman covers the clock with a towel and switches off another one on the wall; as the crowd in the bar dances to Latin music, a round of San Miguel Fresca is carried outside on a ‘tray’, which is actually a clock face without hands.

This new brand has proved to be a hit with younger lager drinkers.

The ad, which is running on ITV, Channel 4 and Five, as well as a number of digital channels and ‘on demand’ services, ends with the strapline ‘hola vida’, or ‘hello life’, which is said to sum up the “living in the moment spirit of the brand”.
To coincide with the ad campaign, a new Facebook page for San Miguel Fresca has been launched.

The new ad is based on the theme of living for the moment.

David Scott, director of brands and insight at Carlsberg UK, said the activity aims to build on the growth of San Miguel Fresca, which was developed in partnership between Carlsberg UK and Mahou-San Miguel of Spain.
“The TV debut of San Miguel Fresca marks a step up in our support for the brand,” said Scott.
“Easy drinking beers account for one in five UK sales of bottled beer and the combination of this innovative new brand with the credibility of San Miguel has proven to be a hit with younger lager drinkers on a night out or getting together with friends at home.”

Image – The new San Miguel Fresca ad is set in a Spanish bar where ‘time is of no concern’.