Shop units could be converted to cafes and restaurants 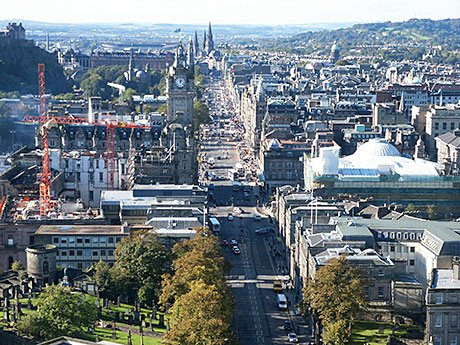 EDINBURGH has moved a step closer to having licensed premises on Princes Street after planning proposals were given the go-ahead by the city council.

Currently, units on Princes Street can only be used for retail or financial services purposes.
However, proposals approved earlier this month by the city council’s planning committee would allow retail units to be converted to food and drink premises.
The plans, included in the Supplementary Guidance: City Centre Retail Core and Tollcross Town Centre document, propose the conversion of retail, or ‘Class 1’, units into food and drink, or ‘Class 3’, units.
The report says permission would only be given to convert units with less than 300 square-metres of floor space which are in a location that can safely accommodate outdoor pavement seating. According to the proposal document, 25 of the 75 retail units on Princes Street fit this description.
Pubs, which are outwith the class 3 category, would not be allowed.
However, other licensed businesses, such as cafes and restaurants, would qualify.
Introducing these types of premises would, according to the document, “enhance the shopping experience and animate the street in the evening”.
The plans have been welcomed by VisitScotland as well as Edinburgh Chamber of Commerce.
Mike Cantlay, chairman of VisitScotland, said licensed premises could provide a tourism boost to the street.
“As one of the world’s most famous thoroughfares, Princes Street is an important port of call for anyone coming to Edinburgh,” said Cantlay.
“With a fifth of all tourism spend in Scotland going on food and drink, it makes sense to allow licensed premises to open on Princes Street.
“And there could surely be few more picturesque places in the world in which to enjoy a meal or a drink than in a street where you can gaze at the likes of Edinburgh Castle and the Scott Monument.”
David Birrell, chief executive of Edinburgh Chamber of Commerce, said the proposals represented “a great opportunity to boost business in Princes Street”.
Earlier this year planning convenor councillor Ian Perry said the council had already received interest from prospective food and drink businesses that were “keen to take advantage of the world-beating views of Edinburgh Castle and the Old Town that you get on Princes Street ”.
A public consultation on the plans will launch in June and run for eight weeks.

Image – A public consultation on the Princes Street proposals launches in June.