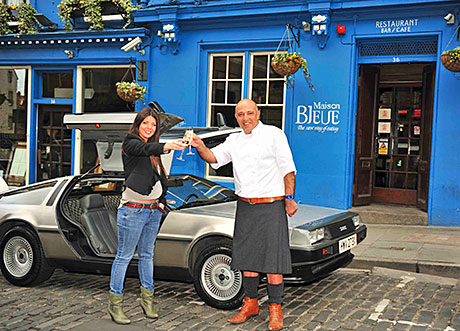 AN Edinburgh restaurateur has turned back time and introduced a lunch menu at 1998 prices to celebrate the outlet’s 15th anniversary.

Dean Gassabi launched the £5 ‘back to the future’ lunch menu at Maison Bleue earlier this month with his daughter Layla, who now manages the restaurant, and a special appearance by a 1981 DeLorean car, like the time machine which appeared in the Back to the Future films.
The special 15th anniversary menu is available at the Victoria Street restaurant, which is known for its fusion of French, Scottish and north African cuisine, from Sunday to Thursday between 12 noon and 6.30pm and on Fridays and Saturdays from 12 noon until 6pm.
The menu, which will be available until August 1, features a range of starters and main courses, and allows diners to choose one for £5 or two for £7.50, based on the prices at the restaurant when it opened in 1998.
Maison Bleue owner Dean Gassabi said the back to the future menu has proved popular with diners since it was introduced earlier this month.
“It’s certainly been a roller coaster 15 years and few of the restaurants which opened around the same time as Maison Bleue are still around today, so we are delighted to be reaching this anniversary,” he said.
“We racked our brains to think of a way to celebrate and make sure our customers got something out of it so our lunch for £5 deal is perfect.
“It lets us look back fondly at where we’ve come from while also looking forward, very much a case of back to the future.”

Image – Back to the future: Dean Gassabi and daughter Layla with the 1981 DeLorean car.