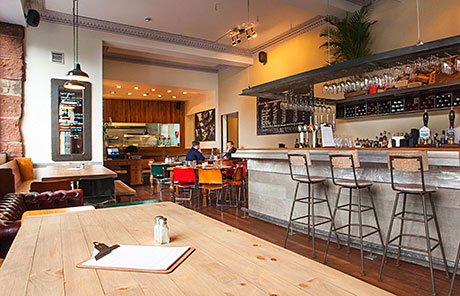 CRAFT beer is booming – and it seems the growth has prompted some operators to shift the focus in their bars to brews from small-scale producers.

Licensees have told SLTN that the category continues to prove popular with customers, and it’s appealing to a new generation of beer drinkers.
Darren Blackburn, general manager of craft beer bar The Vintage in Leith, which opened earlier this year, said the emergence of the term ‘craft beer’ has helped broaden the category’s appeal.
“The term ‘craft beer’ has a US origin and in the UK it came out of the real ale scene but appeals to a younger market,” he said.
“Real ale branding was a bit old world. Craft beers are trying to attract a different group.”
The Vintage stocks craft beer exclusively, and offers a two-thirds of a pint ‘schooner’ glass.
Most customers are said to have welcomed the measure, which was made legal in the UK in 2011, although Darren said not everyone has taken to the European style.
“Quite a lot of people have made comments, customers who think the pint is perfect,” he said.
“We disagree; with cask ale, by the bottom third of the pint it can be warm and it loses its character.”
At The Grog & Gruel in Fort William, the team recently revamped the range to focus solely on Scottish craft beers.
“We took out all our named brands and swapped them for craft beers in one fell swoop and we haven’t seen a sales drop at all,” said bar manager Neil Dennison.
“The bosses did a tour of America and the market there is fantastic for keg beer and I expect it’ll pick up here in the future.”
Stocking an accessible range of craft beers is key to growing sales, according to both operators, who said customers new to the category can be put off by more complex taste profiles.

We try and have a bit of everything at the bar; the variety of craft is up there with wine.

Blackburn at The Vintage said beers such as those produced by Williams Brothers and BrewDog can act as a stepping stone to more “avant-garde” beers produced by smaller brewers.
It’s a view shared by Dennison at The Grog & Gruel, who said the venue’s range of craft beers is rotated regularly to offer customers variety.
“What we have is four taps with a lot of connections and we swap around casks as we see fit,” he said.
At The Vintage, the range of craft beers, which is sourced from a number of different suppliers, is also changed regularly.
“New Wave and Dameck send a list through and we try and pick and choose,” said Blackburn.
“We try and have a bit of everything at the bar, the variety of craft beer is up there with wine.”
Craft beer is also said to be big business for pubs in Punch Taverns’ estate. Stephen Martin, the pubco’s category manager for drinks, said sales are going from “strength to strength as more pubs are embracing the sales opportunity”.
“Craft has drawn new consumers into the market, who probably would’ve drunk wine and cider, and brought a new experience to current beer drinkers,” he said.
“This has led to a change in drinking habits of current beer drinkers and as craft beer is a premium product it can maximise profits – which is good news for publicans.”

Image – The Vintage in Leith only stocks craft beers and offers a two-thirds of a pint, or ‘schooner’, measure.