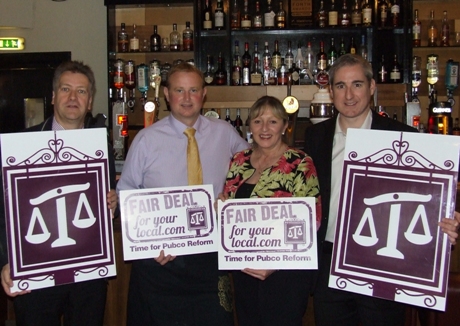 CAMPAIGNERS for pubco reform have called on the Scottish Government to ensure tenants and lessees north of the border are covered by a proposed statutory code of practice for large pub companies.

The Fair Deal for Your Local campaign, which wants the tied pubco model reformed so tenants have the option of paying a fair market rent only to their pubco, met energy, enterprise and tourism minister Fergus Ewing in Edinburgh on May 22 to outline its objectives.
The meeting comes after Scottish lessees learned the proposed statutory code of practice, launched earlier this month by UK business secretary Vince Cable, would only apply to tenanted pubs in England and Wales.
The campaign, which is co-ordinated by Greg Mulholland MP, chair of the parliamentary Save the Pub Group, and comprises organisations such as CAMRA, the Federation of Small Businesses, the Forum of Private Business and Licensees Unite, wants the proposed mandatory rules for pub companies extended to apply in Scotland and has called on the Scottish Government to use its devolved powers to introduce the proposed legislation north of the border.