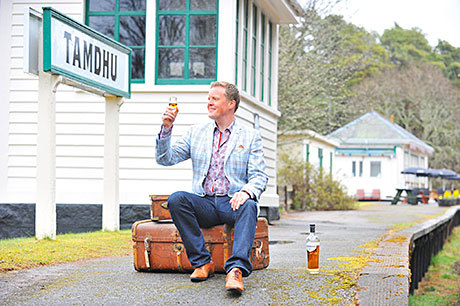 IAN Macleod Distillers has launched the first single malt from Tamdhu since its acquisition of the Speyside distillery from the Edrington Group in 2011.

The new Tamdhu ten year old was unveiled at a special event at the distillery earlier this month, during the Spirit of Speyside whisky festival, which was hosted by TV personality and drinks writer Olly Smith.
The single malt is described as having a “richness of sherry oak on the palate with a gentle hint of peat smoke”; the new-look bottle and packaging is designed to communicate the brand’s values and provenance, according to its parent company.
Leonard Russell, managing director and third generation of the family-owned Ian Macleod Distillers, said the launch of Tamdhu ten year old marks a new chapter for the distillery, which was established in 1897.
“We are committed to revitalising and growing Tamdhu, not only as a brand but from an economic and investment perspective with new jobs created and significant investment in the infrastructure and fabric of the distillery,” he said.
“The relaunch has been in the planning for nearly two years to ensure that our best casks had hit their peak before bottling.
“With a focus on quality, we have honoured the careful distillation process to create a premium malt Scotch whisky we believe Tamdhu’s founders would be proud of.”
Neil Boyd, Ian Macleod Distillers’ UK commercial director, added: “There has been significant interest from consumers and trade to see what we would do with Tamdhu and the Speyside whisky festival is the perfect platform to reintroduce the brand on its home soil.
“We are committed to growing the brand within the UK and internationally.”